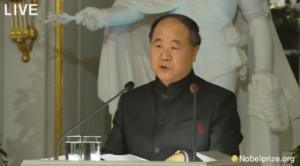 Some articles even show that the methods of the Maoist political debate and insult are still valid, even among the dissidents who claim to fight it. Yu Du, Chinese Pen Club webmaster harassed by the police, even compared him to a prostitute who pretends that her services are healthy!

Several recent statements or positions by Mo Yan, highly regrettable, should not lead to blame him without even reading his novels; after all he is a writer and we speak about the Nobel prize for literature and not the Nobel peace prize.

During a visit to France, in June 2009, he said, for Rue89, that politics is obviously present in the themes of his novels, but that literature does not have a political responsibility as during the time of Mao Zedong. He was also regretting that in China today, the important thing is not politics, but money. 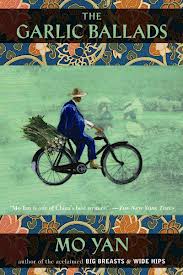 In an interview with Pierre Haski (then for “Libération” in Beijing) in December 2001, he recalled that he had joined the Party in 1979, that he was still a member but he had “lost faith in communism” since … 1989  (date of the Tiananmen Square crackdown).

He also stressed:”In China, a good writer is not in direct conflict with the government. Criticism of society should hide behind the story and the language. Of course, writers can also write “J’accuse” like Zola, but it is not literature, it is a political attitude of a writer.”

In Aix-en-Provence, he also said in June 2009: “A writer is someone who has to write something that a journalist cannot write”. A writer should not copy reality but transcend it and a novel should have its own language.

Finally, Mo Yan constantly reminds us that the peasants and his hometown in Gaomi, are the central themes of his work.

As he told the “Nouvel Observateur” during the same visit,

” All peasants have been abused by the Communists. Under Mao, the countryside has paid […] the first industrialization of the country. And nowadays, the children of the peasants, the 120 million migrants (“mingong”) […] have been financing and built the economic boom.”

Mediation of history serves to make acceptable the recalling of sensitive topics. Mo Yan has been widely criticized in China as in ” Big breasts, wide hips” he sets on the same level members and soldiers of the Communist Party and of the Kuomintang; for the villagers, the abuses were quite as tragic! 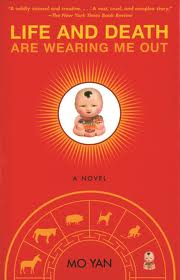 In “Life and death are wearing me out”, the assassinations of landlords during the land reform are clearly reported and the central character of the novel is a land owner who was murdered despite his merits, and is authorized by the gods of hell, to reincarnate.

Similarly, the Great Leap Forward is mocked: the only blast furnaces that produce acceptable quality iron are those that are managed by the “rightists” of a neighborhood rehabilitation camp! The only farmer who still has food reserves is the only one who refused to join the commune: his reserves are looted and his donkey eaten by his neighbours.

The short story “The Calf,” which has just been published in France is also a scathing criticism of the communes!

We can list many examples, Mo Yan has clearly not a politically correct reading of the history of his country!

With the importance of animals in his books, he can proceed hidden, which is the case for “Frogs” but also for a beautiful piece in ” Life and death are wearing me out”: the pig would like to follow the moon where sits Chairman Mao, “you understand, as Mo Yan said, at the time Mao appeared as a deity.”

Similarly, the Maoists slogans are diverted: “Each pig is a shell fired against the imperialists, revisionists, the counter-revolutionaries”

He often uses symbols as the mother in “Red Sorghum”, she is the foster mother, the earth of China. A mother in “Big breasts, wide hips” who gave birth only to girls but finally to a son, pathetic product of her love with the only man who had been able to father a boy, a foreign pastor!

But history does not exclude to stick to present reality: “POW” with the injection of water and chemicals in meat was released in China nearly at the same time as an official investigation into this matter and as the scandal of milk with melamine!

The same goes with birth control in “Frogs”; it is certainly a hot topic in China but Mo Yan criticized this policy years ago in “Joy” and “Explosion”.

3/ The limits of criticism: 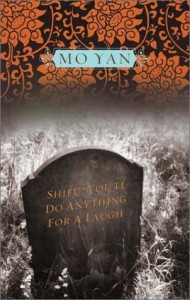 To cross the white line in China can still have very serious consequences. There is no question of criticizing the leadership system of the CP in the country or it’s top leaders.

Mo Yan does not generally speak of the Communist Party as an organization except in “Frogs”. This does not prevent him of developping sharp criticism against the Party cadres and widespread corruption, whether in “The garlic ballad” or in ” Life and death are wearing me out. “

In “The republic of wine,” his translator into French, Noël Dutrait, underlines that cannibalism represents corruption which, with impunity, has invaded social life.

But as soon as one enters the contemporary period, Mo Yan is more cautious. Corruption must be punished, in “Life and death are wearing me out”, Pang Kangmei is sentenced to death.

Similarly, in the small autobiographical text, translated into English “Change” to be released soon in France, he speaks of his studies as from August 1988 in Beijing Normal University, but nothing on the 1989 student movement. Tiananmen Square is still taboo!

4/ The independence of the writer and censorship

“Big breasts, wide hips” was published in 1995 with a few cuts. A literary prize in Yunnan triggered criticism as the book could be considered a rewriting of the history of the civil war. The book was withdrawn from sale and then republished in 2003 with the pages cut in 1995. Unpredictable and ridiculous censorship!

His attitude vis-à-vis censorship during various interviews is very clear; he stressed that he is nobody’s spokesman and claimed independence for himself and for his heroes.

This is why his views on censorship during a press conference in Stockholm in December 2012 surprised and shocked: no, censorship is not as ordinary and necessary as checks prior to boarding a plane! 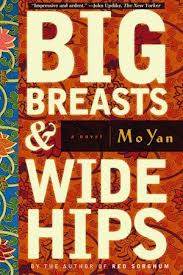 He has been the subject of intense pressure by media and politics, this is for sure. He has been irritated that people in press conferences talk about everything except his books, this too is understandable.

Of course he may underline that censorship does not only exist in China; this is a fact.

Avoiding in “Frogs” detailed episodes of abortion might be explained by the fear of his American publishers, under pressure from Evangelists for this kind of topics. Mo Yan is also entitled to mention the censorship of the market: the way his books were heavily cut in the United States by his translator at the request of his publishers, this is also a form of censorship, but this does not justify what he has said in Stockholm.

Mo Yan’s novels (with their English title) which are mentioned above are published in France by Editions du Seuil, except for”Joy” by Philippe Picquier and “Explosion” by Editions Characteres.