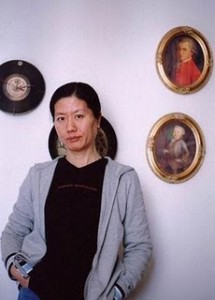 “Love in a small town” describes the difficult relationship of two young dancers, the awakening of their sexuality, the changes in their daily lives and ultimately their break up after the birth of twins. Nothing is less romantic than the story of these two not very attractive characters. The author describes, from a clinical point of view, without dialogues nor focus on the political environment, absent from the novel.

Mao’s China, very prudish, did not accept relations outside marriage. The pressure of the environment, the sense of sin (although this term is not suitable for Chinese civilization) in both young people and their sexual desire that grows, is the storyline. Wang Anyi also shows the strength of the girl, later on a young mother,  less “intelligent” and culturally less sophisticated that her partner, who falls to pieces at the end of the novel.

In the three novels, the heroine is the dominant partner and the center of the novel. The translator of the 1986 edition, Eva Hung, said: “Wang Anyi believes that in any romantic relationship, women are stronger than men and this is particularly the case when they are facing emotional crises” .

Nothing is more modest than the text, so the “sexy” cover is a surprises because it is not “in tune with the book’s content” as stressed by the remarkable blog [1] of the team of Noël Dutrait, Professor in Aix en Provence and translator of many major Chinese writers ( Mo Yan and Gao Xingjian among others).

Wang Anyi has been more translated into English than and French. Editions Philippe Picquier are preparing the publication of two other volumes of the trilogy; in 2006 they have published a great book “The song of everlasting sorrow “, considered the masterpiece of Wang Anyi.

She was born in 1954, her mother is a famous and orthodox writer, but her father is prosecuted as “rightist” during the Cultural Revolution; she has to interrupt her studies in Shanghai and is sent to be “re-educated” in rural Anhui . She manages to join a traveling troupe as a cellist and the intrigues of the Trilogy are partly based on the life of this company.

Back in Shanghai in 1978, she began to write, works for a magazine, publishes a short story (“The destination”), award winning in 1982. Several novels follow: “Baotown” then “Lapse of time”. Many travels in Asia and the United States in 1983 will broaden her experience.

Released in 1995, “The Song of everlasting sorrow” will obtain one of the highest honors, the Mao Dun prize for literature; Wang who publishes extensively since 2001 is the president of the Writers’ Union of Shanghai.

Shanghai is the hero of her works, but she will not be a continuation of the authors of Shanghai before the war and especially Eileen Chang  to whom she was compared. The “Song”, a nostalgic and romantic novel, concerns the life of Wang Ts’iyao, a former beauty queen whose life is paralel with the history of the city, but with an uncompromising but amazing charm. Wang Anyi in this book is close to her characters and her readers are fascinated by her analytical skills in analysing and building a story.

The novel was filmed in 2005 by Stanley Kwan with Sammi Cheng and Tony Leung, this film is not yet released in France; can be that Stanley Kwan has  not met the challenge of repeating the success of “Center stage” the 1992 cult film starring Maggie Cheung, based on the life of actress Ruan Lingyu, the Greta Garbo of Shanghai.