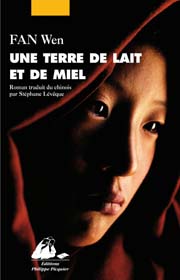 A book and an exhibition centered on the bloody conflict between Christ and Buddha at the border of China Yunnan and Tibet. Two simultaneous but unrelated events.The release last April of a novel by Fan Wen, “A Land of Milk and Honey” and a current exhibition, “Missions of the roof of the world”, with the Foreign Missions in Paris. Fan Wen speaks only Chinese and the Fathers of the Foreign Missions have not read his book!

After the Opium War in 1846, the “unequal” treaties provide for the free movement of European missionaries in China. For Rome, the goal is to enter Tibet by the Chinese provinces of Sichuan and Yunnan, where the Foreign Missions had created several bases. For a century, the French priests developed positions in this area of theTibetan borders.

In 1867, a mission was established in Yangjing / Yerkalo on the ancient trade route from Yunnan to Tibet, the road for horses and tea. A region of gorges of major rivers, the Yangtze, the Mekong and the Sanwen. At 600 km from Kunming and 1200 km from Lhassa, are located the villages of Yangjing (Kersalo in Tibetan), who depend partly on salt mining.

Close to the bed of the Mekong River, wells can collect brine that Tibetan women carry and pour on 3000 small drying wooden platforms, built on stilts on terraces. The sun and wind allow evaporation. This salt has caused many deaths because its extraction and trade were so very lucrative.

Yangjing is also the largest concentration of the Naxi minority in Tibet, but there the Naxi speak a language very different from those of Yunnan (Lijiang), live like the Tibetans, are Buddhists and engaged in agriculture. A 3100m above sea level and overlooking by 900 meters the bed of the Mekong (Lancang Jiang) Yangjing houses 600 Catholics and the only church in Tibet. 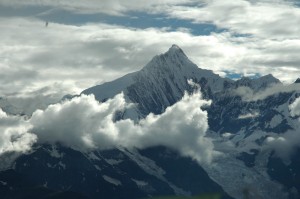 A Buddhist monastery and the sacred mountain Khawa Karpo complement the extraordinary setting of this novel, which brings to our attention the struggles during the twentieth century between Chinese mandarins, Buddhist lamas, shamanism Naxi and Catholic missionaries.

An exhibition: The “Missions of the roof of the world”:

Fan Wen’s novel and this exhibition “Missions of the roof of the world” tell us this epic. What is remarkable is that the novel and the exhibition differ only on minor aspects. In the catalog, the comments by Françoise Fauconnet-Buzelin, curator of the exhibition, are even sharper that some comments in the book:

“Driven by a sincere faith but a conservative mentality, missionaries in Tibet were generally not very open to understanding the religious world they encountered.They supported the colonial ambitions of France, who had imposed on China a protectorate on missions … They were witnesses and frontline targets of power struggles and conflicts between Chinese and Tibetans, which devastated the region. “

With the novel and the exhibition we are amazed with these assertive personalities, some of whom became renowned specialists such as Auguste Desgodins (1826-1913), a founder of Yangjing, who oversaw the 1899 edition of the Tibetan-Latin-French dictionary.

Armed conflicts at the heart of the novel: 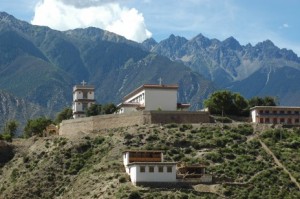 The novel develops these early years, explains the approach of the missionaries (buying slaves, donating farmland, creating clinics, schools …) and the hostile reactions of the lamas to this foreign religion, but also to behaviors that threaten the feudal economy supporting the monasteries (rent, forced labour, armed militias).

This aspect, which is generally not widely commented, is treated without bias by Fan Wen, in a much more nuanced manner than some novels, even written by Tibetan authors (“The Red Poppies” by Alai).

Armed clashes between Chinese and Naxi, Naxi and Tibetan, Chinese and Tibetans, but also conflicts between Buddhism and Catholicism, are at the heart of the novel. Although the missionaries “sin” by their arrogance or by delivering automatic rifles to ingratiate clan leaders, but the price paid was very heavy and many missionaries and faithfuls were  murdered.

In a fascinating interview conducted by Bruce Humes (3), an American translator who, like the writer, has lived in Kunming, Fan Wen explained that many of the heroes of the book have a historical “model” and that he was inspired by Father Maurice Tornay, murdered in 1949 by lamas and beatified as a martyr.

Born fifty years ago in Sichuan, Fan Wen, after studying literature at the University of Chengdu, settled in Kunming (Yunnan). 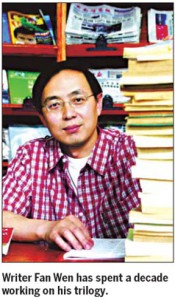 He has published a dozen novels and short stories, but “A Land of Milk and Honey” made him known to the general public and appreciated by criticics. The book, with a run of 50,000 copies in China, was on the final list of the Mao Dun Literature Prize, China’s biggest prize, in 2008. A research work of many years and many stays in Yangjing; as a Catholic, he was very interested in the history of missions in China.

Through the collision of cultures and religions, he traces the major events in the history of China in the twentieth century. In this thick book that is read with passion, the chronology is often undermined but the construction is very elaborate.

He has respect for religious phenomena but does not exclude the romantic episodes, magical or supernatural. He campaigned for a “supernatural realism” because he highlights that in Tibet, the divine spirits mix with reality. In these backward, feudal and closed societies, the villagers lived in the middle of myths and legends.

He is rather optimistic about the current situation, sometimes a little too much. Party policy on religious “Freedom” is a conditional freedom, although the situation is less severe than during the Cultural Revolution, where churches and monasteries were destroyed.

It is not with arrests that we will maintain stability:

Confidence in the future: it is in a Naxi child that a Buddha is reincarnated; it is Mu Xuewen the Party Secretary, who allows a young Catholic to attend classes at the theological college in Beijing … But we would like the statements of Mu Xuewen to be taken into account:

“We received a painful lesson: beliefs cannot be hampered or destroyed. It is not by performing arrests that stability will be maintained in the Tibetan areas. “

The book was translated by Stéphane Lévêque, who has also translated (with Yvonne Andre)  “Song of everlasting sorrow” by Wang Anyi. In an interview, the translator explains the difficulties he has encountered and overcome after visits to Tibet and contacts with Fan Wen.

This novel, the first volume of a trilogy: “Compassionate Land”, is the story of a living Buddha, and the third volume “Canticle to the Land” is a wildly romantic saga in the same region.

As for Fan Wen, he still follows the French, not missionaries but engineers who from 1903 to 1910 have built at the cost of thousands of lives the railway linking northern Indochina to Kunming.

Exhibition “Missions of the roof of the world” Foreign Missions of Paris, 128 Rue du Bac. Paris. Until “July 31, 2013. Information on the site.