The Chinese writer Xinran and prejudices against girls.

When a poor Chinese peasant is unfortunate with six girls (“chopsticks”, fragile and of little use to their family), he will regret all his life not to have a “beam”, a boy that  can support the family roof. Chinese writer Xinran, shows that the rapid changes in China may upset traditional ideas.

Xinran and her three previous books:

Xinran, who was in Paris to present her latest book ” Miss Chopsticks”, was born in Beijing fifty years ago, in a wealthy family who was persecuted during the Cultural Revolution: house burned down, parents imprisoned for seven years. The girl, who suffers from “wrong class origin” lived in a military orphanage. “All In all,” she told us , I lived with my mother less than three years. The Military University allows her to study English and international relations. “

Recruited after a competitive exam at the Nanjing radio station, she launched, in 1989, a program “Words on the night breeze” where, for the first time, women are encouraged, to  talk, live, about their personal, family and even sexual problems. The  success is spectacular until 1995, despite the late hour of the programme; Xinran then travels to China and Tibet, continues her investigations but decides to go to London in 1997. 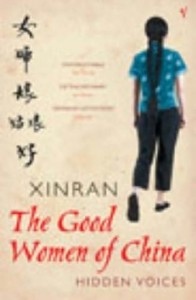 After months of odd jobs, she obtains to teach at the University of London and brings her ten years old son. She then writes “The good women of China”  a fascinating document on the status of women in China, encouraged by an experienced literary agent Toby Eary, who was representing the successful writer Amy Tan. The couple will marry in 2002.

The success of “The good women of China ” is well deserved: a wide variety of stories that address different aspects of women’s lives including sexuality, the story of lives destroyed on basis of ideology or tradition. Sympathy but not too sentimental, a naive approach (genuine?) that was reproached to her and which shows that, as intellectuals who follow the generation “re-educated” in the country side, she knew little about life in rural China.

In 2004, she published “Sky Burial” ; the origin of the book is a meeting with a Chinese woman who spent thirty years in the desolate regions of Tibet in search of her husband, a medical officer, who disappeared during the 1958 Chinese operations in Tibet . A book, very different, on clash of cultures, in extreme life conditions. Xinran has been criticized for some minor mistakes and an approach somewhat conceited (afterword by Claude B. Levenson). But this look is that of a majority of Chinese vis-à-vis Tibet or “national minorities” in China. At least,  Xinran shows admiration for her heroine and her exceptional life.

For two years (2003-2005), Xinran writes regular columns for the major British daily The Guardian, she publishes a book, which unfortunately is not 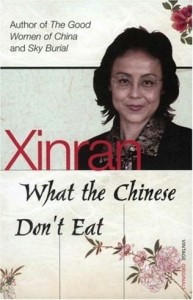 translated, “What the Chinese do not eat.” It is a good document that details the efforts of the author to clarify misunderstandings, highlight European or Chinese prejudices and try to limit the proud ignorance of Europeans vis a vis China and its culture.

The story of three sisters in a family of six (as we know, the policy of birth control despite pressures and repression has limited success in some areas). They leave a poor village in search of work in Nanjing. With very different skills, they will find to use them successfully in a restaurant, a bathing establishment and a tea / reading room. They return to their villages with thick bundles of banknotes that will eventually convince their father and the village that chopsticks can be stronger than a beam!

This book is not a document about migrants from the countryside, the outcasts of Chinese cities: a light book  on a serious subject,  partly a comedy, partly a little fairy tale where city dwellers help these farmers terrorized by the city, isolated by their dialect and for one of them illiterate.

The sense of humor of Xinran creates very pleasant developments, but the epilogue based on the true story of the three young women limits a little the optimism of the book. The eldest, after some sentimental difficulties, returns to the village, is married to a disabled employee, and after having given birth to a daughter, is very anxious about whether her second child will also be a “chopstick”, “In her three years in town she has learned nothing about freedom and independence of women.” The tea room disappears, closed for “sale of banned books” but the sister who worked there had learned English, and the news that Xinran that obtained on the professional development of the third sister did not convince her.

Xinran: “I feel much more like a journalist than as a fiction writer.”

We met Xinran during her visit to Paris, to the Phoenix Bookstore.

Q- Your articles for “The Guardian” are written directly in English, but not your books

I only can write my books in Chinese; often my characters are people I met, also the Chinese comes naturally … And China is rich with many dialects that a foreign language can not deliver. Finally the Chinese language is a culture far older than English and write in English would be for me to pass a wrong message to Western readers.

It’s a real problem: I made so many interviews that as soon as I write, real people come to mind. For my last book, the three sisters are not sisters but actually exist. My challenge was to compose the character of the mother. Finally, I chose the mother of the eldest sister, a woman I met. I consider myself much more as a journalist than as a fiction writer.

Q- Your book surprised by his tone, his humor, his optimism; yet the topic of migrants (mingong) is very serious  … 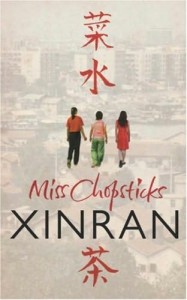 Yes, but remember that the book takes place in 2002. In the 1980s, the situation of migrants was terrible. When I came back to China after a few years, I found that the situation had improved. The uncle in the book worked in cities for much longer and I show that, in the beginning, it was very difficult. You quote the novels by Liu Xinwu ,much darker, it’s true, but remember they relate to the 1990s ….

Q- Similarly, the village of the sisters is in Anhui, a backward province; The impression we get from your story is very different from the book by Chen Guidi which has been translated a few months ago into French (” Chinese peasants today”).

Yes it’s true that peasants with housing and education are the main problem of the authorities. The problems are very difficult to solve, especially as middle managers have a relatively low level of education and resist change.

Q- There is a paragraph in your book (p. 218) that will create controversy: “Today the Chinese ask democracy, but how many are they to understand what it is? Can we speak of a true democracy in the West, with all these criminal gangs, all these bloody wars of religion and all those governments who make decisions against the will of their peoples? Did the Tiananmen students really knew what they were asking for? “

I am not a politician, I refused many times to join the Communist Party and this has affected my career as a journalist in China. I am not competent in all these areas, but the interviews I conducted during the years show me that the idea of democracy is not understood, you can not change in twenty years the institutions and culture of a vast country with a tradition of imperial government. I also wrote: “Moreover, many Chinese see no difference between the Cultural Revolution and the Tiananmen student movement: Both were led by youth in the same hope to eradicate the power in place on basis of this sacrosanct “democracy”.

Q- I will be quite in agreement with you when you write (p. 225) “All our students know your Shakespeare, Dickens, Victor Hugo and so on … And you (European friends of one of the sisters) you do not know Cao Xueqin and our Tang Xianzu! When I think of the size of China, with its billion people and its five thousand years of history, tell me how you can ignore all this”. Do you think that this “European-centrism” is declining?

I am not sure, but remember that during the first opening after the intellectual revolution of 1919, China was importing ideas and culture from the West, Then everything stopped during the Maoist period and during the last twenty five years China has had little time to make itself known to the West.

Q- You write in your column for the Guardian: “The West has destroyed our self confidence many years ago (during the Opium War). Now, finally, we recover. Is there not a risk of “nationalist” developments?

No I do not think, you know in the course of history, the countries and cities were built behind walls, we tried to bring progress within these walls and there was no  expansion policy, the construction of a Roman type of empire never existed.

You can connect to our site, www.motherbridge.org. This is a foundation to help underprivileged children in China and to build a bridge of mutual understanding  keeping in mind also the tens of thousands of young Chinese girls adopted in the West and who, one day, will ask questions about their origins. We also want to help their adoptive parents to answer.