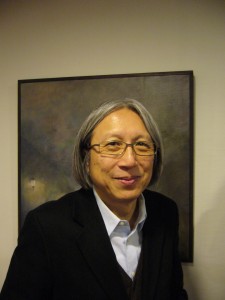 An excellent novel of political and social fiction has been translated into English this summer with an interesting preface by Julia Lovell under the title “The Fat Years” (1). The French translation (” Les Années Fastes”) will be published by Grasset early next year.

The author, Chan Koonchung, was the guest of a meeting organized in Paris by the CERI (Centre d’Etudes et de Recherches Internationales) at Sciences Po and Rue89. The presentation organized by Pierre Haski, Managing Editor of Rue 89, and Jean-Philippe Beja, a researcher at CERI, enabled Chan Koonchung to clarify some of his themes but also the impact of his book.

A life in Beijing, and a censored novel …

The book published in Hong Kong late 2009 then in Taiwan was quickly banned in China. Pirate editions followed and especially on the internet where the author has “pirated” his own publisher, allowing on the internet a version available for free … The buzz was important and the author was able to present his book abroad: a radio program with Bi Feiyu in London and a presentation at the book fair in Singapore.

The author explains that he is cautious and not in the center of a mobilization as Ai Weiwei, and may be soon as Murong Xuecun who has just been reported in Oslo with a highly critical speech.

Chan is best known for his publishing activities and it is his first novel. He was born in Shanghai but educated in the English system of Hong Kong where his parents had taken refuge. He now lives in Beijing, for him a fascinating city that he describes in his book.

As said by Old Chen ( a character close to the author) quoting Lu Xun “In a good hell, people are aware that they are are living in hell and so they want to transform it, but after living for a long time in a fake paradise, people become accustomed to it and they actually believe that they are already in paradise “(p.161). That says it all …

In 2013, China provides the economic leadership of the world after another financial crisis and the collapse of the dollar; the population enjoys prosperity and demonstrates an euphoric feeling but also a collective amnesia about political events of great violence that took place during one month. Only some individuals, Old Chen and his former sweetheart Little Xi (now an internet activist), are obsessed with this collective  blank memory period.

The first part of the book presents the different characters and the good life in Beijing as well as the intellectuals pampered by the authorities who live well and are euphoric.

This is one of the interesting aspects of this book, this description of intellectuals, rare in contemporary Chinese literature. A few books, however, are translated “The Fallen Capital ” (in French) by Jia Pingwa or “Baptism” by Yang Jiang …

” The Fat Years” is read with pleasure, the portraits are alive and if you know a bit about Beijing, you will find many familiar places.

In Part II, Old Chen and his friends are looking for Little Xi in several provinces where they discover the condition of the peasants and the expropriation of land, the very rapid development of Protestantism (official and hidden), the differences in living conditions, the Party control (Yang Jiang’s books no longer exist in the files of the book stores ..!)

The group gets hold of Dongshen, one of their relations, but also a member of the Politburo; they force him to talk. He will explain to them during forty pages why the Tiananmen massacre of 1989 was forgotten and how the power later organized a major crisis for the population to accept the dictatorship: “In a moderately well-off society, the people fear chaos more than they fear dictatorship “(p.248)

A Chinese model is then developed, combining control by the authorities and a very liberal economic policy focused on domestic demand. Similarly He Dongshen explains the country’s foreign policy, often guided by the needs for raw materials.

Finally he cynically justifies the monopoly of the Party that only wants to preserve its own power, which rules out any reform but also avoids the risk of nationalist and fascist developments. As He Dongshen mentions “even if we are fascists, we are only in the early ages of fascism now” (p.283). He will finally tell them the secret of the general euphoria …

This very pessimistic questionning by the author on the Chinese model is of concern for the planet; the risk of some developments can be further analysed by reading a good article by Zhansui Yu in “The China Beat.”