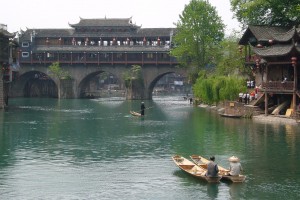 In China, the Han are 92% of the population. Fifty-six “ethnic minorities” total 110 million of which 9 million people are Miao; with the Tujia, the Miao represent an important share of the population of Northwest Hunan. Miao are found throughout the South West China, where they were migrating under the pressure of the Han, but also in northern Vietnam and Laos (known as Hmong).

Fenghuang is a border zone between the two ethnic groups; many Miao rebellions were followed by bloody ” pacification campaigns “of the imperial armies.

Around 1920, Fenghuang within its walls, had 5000 inhabitants, but is surrounded by several garrisons where 7000 soldiers lived. Fortresses, watch towers, villages of soldiers turned peasants, the remnants of this period are numerous. The most spectacular is the wall built under the Ming, 200 kilometers from north to south of the province to protect against rebellions by the Miao; this is not the Great Wall but the remaining few miles are beautiful.

This whole area has long been isolated (the first roads were not built until 1950), controled by the “warlords” who did not recognize the authority of the governors of the province. Governmental or private armies, bandits, all these people were fighting for the control of the opium trade from the nearby province of Guizhou. The area is at peace after the Communist victory and the army then recovered around Fenghuang 18,000 firearms ..! 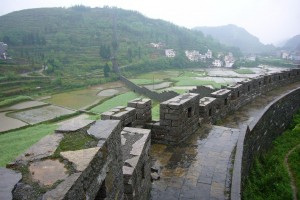 The city has grown, but the old town surrounded by high walls on one bank of the river is proud of its towers, covered bridges and several large magnificent clan houses. The birthplace of Shen Congwen is modest and of limited interest.

The area is very beautiful with its Miao villages to the west much less preserved, however, that some areas of Guizhou province.

Fenghuang is still not on the map  of travel agencies and international tourism. But thousands of students and young Chinese visit during the weekend.

Poor Shen Congwen, he could not imagine the crowds of tourists who stroll the cobblestone streets, the river banks and the covered bridge, the hundreds of souvenir shops and stalls of local delicacies, bars / karaoke …

His tomb, just outside the center, whose location is governed by the rules of geomancy, sees his perspective blocked by a large building under construction .. !