The author explains in his afterword to the American edition that a major research work was to enable him to write a historical novel about this troubled period. The drift toward a love story is probably due to the influence of the great novel by Qian Zhongshu published in 1947 “The Fortress Besieged” (Christian Bourgois 1997). Indeed, Ye Zhaoyan, a graduate of Chinese literature at the University of Nanjing, has made this novel the subject of his dissertation.Also there, the author studied in Europe; the historical period is the same  so as an unhappy marriage imposed by the parents.

The influence of Eileen Chang [2] is also present through her novel “A devastating  Love” (1943),a love story in a time of national calamity. The hero Ding Wenyu even met the mother of Eileen Chang in Rome ! One can regret that Ye has not the qualities of brevity of Eileen Chang, as the first one third of the novel, cleverly constructed, is a somewhat slow tempo. Moreover, one can imagine with difficulty how such a playboy is suddenly changed into a young blushing lover and one wonders if his love passion is not a more or less neurotic obsession.

The portrait of Yuyuan is far more attractive despite  macho remarks like “Deep in herself, there is not a single woman who does not love that a man is interested in her, would it be an older man with white hair or a beardless boy”, this kind of remarks on three occasions in the book! But much will be forgiven because Ye’s novel excels at describing the atmosphere of Nanjing, capital of the nationalists, and brings us to imagine the surroundings of Chiang Kai-shek and his wife; the American edition has conveniently added a biographical index of historical figures mentioned. 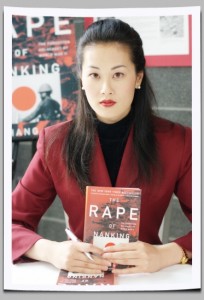 Ye Zhaoyan:name first, not as Zhaoyan Ye like in the French translation, a habit  which is spreading and which regret the excellent blog “Chinese Literature and Translation” (jelct.blogspot.com). Anne Sastourné, from Les Editions du Seuil, explains the reasons for such a situation.

Ye Zhaoyan then is fifty years old and is the heir to a literary dynasty; his grandfather Ye Shengtao (1894-1988), professor, journalist and publisher was also a famous novelist, “Ni Huan-chih, the teacher” (1929) is a major achievement of the time.

Born in Suzhou, like many writers; his family like so many others, experienced difficulties during the Cultural Revolution and he spent four years as a steelworker in a  factory.  At thirty years old, he starts to be famous and has since written thirty books in different genres: thrillers, martial arts, romance novels (called “mandarin duck”), historical novels …

In 2007, he published an essay on historical figures and writers (“Old Characters”) and a book in the serie of old myths where writers like Su Tong and Li Rui have both signed a book.

In France, two of his books have been translated: a script for the screenplay of the film by Chen Kaige’s “The Young Master” (Philippe Picquier, 1997), released in the U.S. under the title “Temptress Moon” with the actress Gong Li. It is a kind of “chinoiserie” for Western audiences, a mix of sex, opium and decadence of a great tradition, the heiress of the family being the heroine.

Much more interesting is “The greenhouse without glass” (Bleu de Chine.2005). A semi-autobiographical novel in which the excesses of the Cultural Revolution are seen through the eyes of a young boy. The author shows us that he is a gifted storyteller with scathing humor. Children denounced parents, couples accuse each other of the worst crimes to try to pacify their torturers, the various factions of Red Guard exhausted in absurd and bloody fighting.