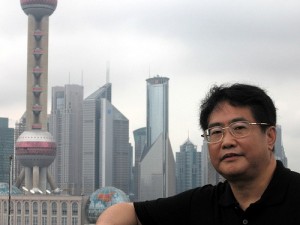 The sixth investigation of the Inspector Chen Cao will take him from Shanghai to Beijing to investigate the private life of Chairman Mao …. Indeed the Party leadership, unhappy with the success of the book by Li Zhisui, Mao’s doctor,( who published on the privacy of the former Helmsman many juicy details), fears a new scandal. The wealth of the granddaughter of a former dancer and mistress of Mao has strongly increased, is there a new book in preparation? Homeland Security is on the case but Inspector Chen is also asked to investigate with tact.

In this novel, Chen is supported by his friends and various supporters: politicians, businessmen linked to the triads, the family of Yu, his deputy  … Police wars are not really a problem. As in the previous novels, he can perform within the system and does not hesitate to use certain weapons as morally reprehensible as envelopes, lavish gifts and entertainment, blackmail. That is why he is reluctant to commit with his childhood sweetheart, the daughter of a dignitary …

“Because he was not able to identify himself with the system, not yet fully in spite of his” success “within the system. Deep inside him, he aspired to something else, to a certain independence, even limited. (P.198)

His knowledge of literature provides easy contacts with various circles. Many classic novels are mentioned: “A Dream of Red Mansions”, one of the great classics of world literature, but also closer to us the novelist of Shanghai in the 40’s, Zhang Ailing (Eileen Chang):

“What a woman, she danced like a poem and the beauty of her words seemed to whirl page after page. Alas, she should have stayed among her people. A flower of Shanghai could not survive the wind and the storm in San Francisco “(p.78).

Cop but also a poet, he knows and understands the poetry of Mao, which will help in his investigation. He also introduces us to the Tang poets and Li Shangyin (813-858).

The novel describes many episodes of Mao’s private life: his four wives, his mistresses. This does not improve his image :  Mao did not consider women important, they were only one way to satisfy his “divine” sexual needs. It was commonplace for an emperor to have dozens of concubines “(p.241).

Chen takes us on a visit to the mausoleum of Mao in Beijing, but also to his private apartments that are not open to the public: “Mao was a modern emperor despite all his speeches on Marxism and Communism … in ancient times an emperor was compared to the sun but Mao himself was just the Sun” (p.65).

The novel provides an overview of how the Red Guards were operating and the special brigades sent from Beijing with specific murder missions . How many murders and fake suicides, how many millions of people who did not recover. Very interesting is the  recently released book by Song Yongyi on “The massacres of the Cultural Revolution” (Buchet Chastel).

But it is equally clear that the image of Mao is not as negative to all,

“For those that the materialist reforms left by the side of the road, the Mao years become a myth. A sort of golden age without gap between rich and poor, without widespread corruption of the Party, or organized crime or prostitution, but with free medical insurance, stable pensions and  housing prices controlled by the state ” .
Some intellectuals are also inclined to think along these lines especially those who may no longer enjoy the benefits of the Writers Union (p. 108).

The plot is attractive, you do not drop this book before the end. You should also know that Qiu was successful and had his American publisher accept that contrary to conventions, the corpse is discovered only on page 140! In addition, this book is well translated and the author,supplying the necessary understanding of the time, does it in a  clever way and without being heavy. I will not recommend that you read this book in the sun on the beach, it deserves much more than that!

Some questions to Qiu Xiaolong :

Q- Why did you want to write a book about Mao? 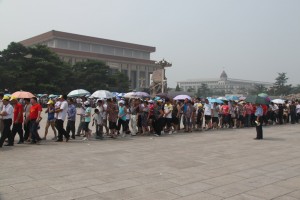 For China to progress, the Mao “problem”has to be settled; his place in history and modern culture of China has to be assessed and discussed, but for political reasons, no one in China writes a book about Mao.
As you know, my family has suffered from the Cultural Revolution and I certainly did not have the same feelings as those who have benefited from the system. But at the time, I was very young and like many Chinese, I believed in Mao. People of my generation feel they have lost ten years with the Cultural Revolution.

Others,  older, look at Mao as a symbol of an ideal social system, without gaps between rich and poor and with a ruling by the working class.
Most young people know very little of Mao, they are busy making money and it does not interest them. This is disturbing because in fact their attitude today is linked to the disillusionment brought about by the period of Mao in China.
My generation has the responsibility to inform the younger, all that is not taught at school in China where they have only one wish, to move on…

I have translated many poets and I write poetry; Mao uses traditional forms and his poetry is not bad. But what bothers me is his attitude as an Emperor: he wants to be in the continuity of the emperors in the Chinese tradition …

Q- There has been a lot of research for this book?

This book is not a book about the historical figure but on the private life of Chairman Mao. Nothing is invented, sources and official documents are available and the fact that Mao was a bigamist during a certain period of his life is a simple fact when we compare the dates of official publications … I also had the chance to visit in Beijing Mao’s private apartments, which is currently very difficult.

Q- You talk a lot about the Cultural Revolution but without any real analysis.

It is a complex business and political analysis of this period is beyond the scope of this novel, but I think we mostly talk about the “complex of the emperor” that exists in China today. We are flooded with TV series, films about emperors who “built” China, some revere the imperial function, the imperial dictatorship and think it may be a solution for China. This is a matter of concern and we have to move away from these references.

There is some progress because there are more books and films about China. The Internet also allows access to much information but at the same time, things change so quickly in China that this may lead to some confusion in the minds.
I visit China regularly and it is one of the roles of writers to push you to discover the Chinese culture. This is why I mention writers and poets and one does not understand much about modern China without knowing its history and its literature.

I quote, as in my previous books, the poets I love and especially Li Shangyin. I  speak of the great classic novels but also of writers closer to us as Zhang Ailing (Eileen Chang). She is well known in China today and Ang Lee’s film “Lust caution” has been of support; she is not one of my favorite writers, but she is loved by female readers.

Q- Do you read Chinese authors?

Yes regularly, Yu Hua , Mo Yan, Wang Anyi  … I also like Han Shaogong.
As for detective stories, there is nothing much available, you speak of He Jiahong , I know his name but we have not met.

Q- Your book has been released in France …

Yes it was released in France before the United States where it will be released at the end of the year! And today is also my first interview on ” The Mao Case”. I have a lot of readers in France and they show me their sympathy. I appreciate the work of my editor and I think  my translator must be good when I think about the emails she sends me asking for clarification and how she is devoted to her work.

Q- You have many readers, 700,000 copies of your books have been sold, do you regret not to write in Chinese?

I had a bad experience with the release of one of my novels in China, with many cuts, the very name of Shanghai has disappeared! If there were no such problems, I would of course write in Chinese and when I started, I wrote in this language.
Living in the U.S. after the events of Tiananmen Square in 1989, I wrote in English and I had no choice because I would not have been published in China; I was so lucky to have a sufficient knowledge of English.
I am able to go regularly to China, I  have spent more than two months this year; to be both inside and outside is a great advantage to understand what is happening in this country.