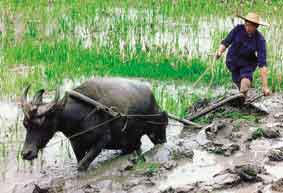 Rice is the first global cereal for human consumption. This crop has shaped the landscape of plains, carved the mountains and deeply influenced the civilizations that developed around the rice fields, particularly in Asia.

This is why the new edition of the novel by the Malaysian writer Shahnon Ahmad, “Rice”, was an opportunity to read again this beautiful text with in perspective a novel with the same title, “Rice”, by the Chinese writer Su Tong, who has been lately much on top of the news.

Su Tong has indeed been awarded the prestigious Man Asia Literary prize and has recently published a good collection of articles and short stories, “On a Bicycle.”

A parable, the cycle of earth and rice:

The hero of the book by Shahnon Ahmad is a Malay peasant, Lahuma, in the province of Kedah (where the author was born) in northwest Malaysia. A poor peasant but who owns a rice field, or rather what did not fall into the hands of the Chinese shopkeeper in the village.

Lahuma and his wife have seven daughters and every year the cycle is repeated for the parents helped by the elder daughters. The rice field has a deciding influence on their view of the world and on social relations of support or envy in the village. Life only exists through the various stages of rice cultivation.

Lahuma hurts his foot with the thorn of a palm, the infection develops; his wife Jeha and two daughters clear the rice field and a land owner helps with his tractor. Rice is threatened by crabs,  floods,  and then  birds:

“Whether we live or die depends on the rice field. The rice field is the breathing of our lives as from the time of our ancestors. Rice must be planted and protected. Anyone who comes to attack, our duty is to defend it. “

Lahuma has absolute confidence in the protection of Allah and is treated, far too late, only by a healer (bomoh) who fights against evil spirits.

The end is tragic and at the time, the author has been criticized for exaggerating the resistance of farmers to change not only to fight against natural disasters but also to benefit from medical treatment.

But Shahnon Ahmad, in 1966, shows his pride in being a Malay at a time of racial tension before the anti-Chinese riots of 1969 which will give rise to a policy of positive discrimination in favour of the Malays, the “Bumiputra” (the sons of the soil) .

“Rice” is a classic which is read at school and was adapted by the Cambodian filmmaker Rithy Panh (known for his film about the  Red  Khmers, and his adaptation of “A dam against the Pacific” a novel by Marguerite Duras ). 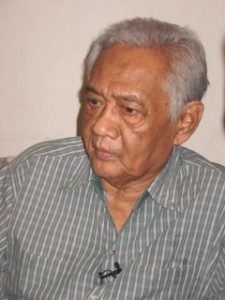 The author is the best known Malaysian writer. His political opinions in the opposition led the  present Prime Minister of Malaysia, Najib Tun Razak, at that time Minister of Education, to try to take away the title of “National Prize Winner” which was awarded to him in 1982.

Indeed, in 1999, he was elected under the banner of the Islamic Party (PAS) and successfully published a satirical novel, “Shit,” which involves Prime Minister Mahathir (who ruled the country from 1981 to 2003) and who had just managed to have his deputy prime minister, Anwar Ibrahim, sentenced to six years in prison for sodomy.

Shahnon Ahmad is an interesting character: teacher and officer in the army, a university education (three years in Australia and then in Penang in Malaysia). He leads during eleven years the Islamic Center of the University of Sciences.

His controversy with Kassim Ahmad on the movement of the “Islamic literature” is worth mentioning: for him, only a Muslim can produce Islamic literature, literature produced in the name of God and for the good of mankind. But for the thinker Kassim Ahmad, the religion of the author did not matter, only the values ​​should not be contrary to Islam.

Other controversies followed: Shahnon Ahmad with the novel “Tivi” (“The TV”) is accused of pornography! A television set, sold by a Chinese dealer to a peasant, will have evil effects, he will abandon his religious practices and, after viewing of pornographic videos, has incestuous relations with his daughters.

Nothing more different than the book of Su Tong that begins where the previous one ends. It is because the rice fields of his village have been flooded that Wulong arrives, starving, in a small town near Shanghai in the 1930s.

An important rice merchant feeds him for his work as a clerk. But the humiliations lead to hatred and revenge. One of the girls is pregnant by a landlord, he marries her …he becomes a master where he had been a slave.

Initially a rather nice character, but with his social rise, he becomes a criminal who strikes blows for the blows he receives.

Three generations will coexist in the rice shop:

• rice, a symbol of power during famines;

• rice that can kill if, hungry, too much is eaten (a child is found dead in a sack);

• a heap of rice that can kill (Misheng his son suffocates his little sister Xiaowan);

• rice for which some people will kill (the captain of a barge of rice …). 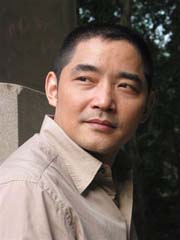 Great pessimism about human nature for a writer, Su Tong, who lives in Nanjing and seems a “bon vivant”, a fan of football and golf. He is anxious to write books that won him popular success (such as “Raise the Red Lantern”) and the esteem of those who call themselves “intellectuals”.

“Rice” is probably his best book, but “Shores,” a very good novel, (the French translation of “The boat to Redemption” already published in English in 2010) is due before the end of the year with Bleu de Chine-Gallimard.