He is also known for his writings on literature and is a member of the Lu Xun Prize jury. His works on literature, according to a reader of Rue 89, who recommended this writer, are of high quality.

This assessment, along with the name of the translator, Brigitte Guilbaud, who has translated with talent Yan Lianke, pushed me to read “Bronze and Sunflower.”

Sunflower, seven years old, is an orphan; her father is an intellectual who is to be “re-educated” in the countryside in a ” May 7 College”.

The village of Damaidi located beside a river is surrounded by boats and reeds. Her father, a sculptor known for his statues in bronze of sunflowers, drowns himself. The little girl is adopted by the poorest family in the village; the son, Bronze, a mute, had only one friend, a buffalo; he has now Sunflower.

We are told the life of the village, floods, locusts and famine, the efforts of the family to survive, to earn some money to give the grandmother medical treatment.

Cao Wenxuan was born in Jiangsu province; water, rain, rivers play an important role. The novel is somewhat in the style of Shen Congwen, even if Shen brings more tragic turns and is also more concise.

We can have some  concern for the young Sunflower, but we know that everything will end well and even the “negative” characters are not really all that bad!

“The Straw House” is his most famous book, for which he won one of his two Song Qinling awards for children literature. A less rosy story for school children, a little older.

Sang Sang is fourteen, he is the son of the headmaster of a small village, Youmadi. His friend, Bald Crane, is bald and this characteristic creates many adventures.The rivalry between neighboring schools is the origin of theater performances. The beautiful star of the play, Bai Que (white dove), is courted by a teacher who is also a  flute player; a romance with no future, despite the efforts of Sang Sang, who plays the go between.

The book is more compact, less predictable with many twists and turns … 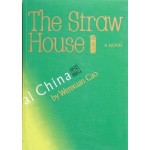 I have no standing to assess if this literature is adapted to an audience of school children but I have read these books with pleasure while I cannot stand for very long mangas, robots or sorcerers …