Factory Girls: from village to city in a changing China 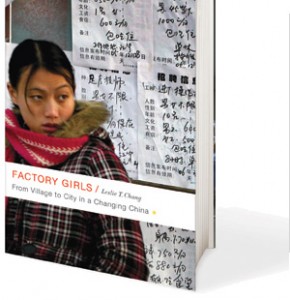 “Factory Girls…” the book of an American journalist of Chinese origin, Leslie Chang,  who has been translated, is a survey of factory work, the professional and personal development of several young women that the author has followed in the extraordinary economic dynamism of the city of Dongguan, in southern China.

Dongguan 1.5 million or 6.5 million people?
Located in southern China, between Guangzhou and Shenzhen (one of the first special economic zones where China has resumed in the 80s with the capitalist economy), Dongguan city officially has 1.5 million people. In fact, this conurbation is home to at least 6.5 million people if the migrants who work there are included.

In this region, one of the richest in China, Dongguan hardly existed twenty years ago. Today, computer component factories are side by side with labor intensive units, such as sports shoe factories (Yue Yuen factory employs 70,000 people !). In this factory, the belt workers were paid in 2008, $ 72 per month, 11 hours a day, sixty hours a week and sleep in dormitories of ten.

Harsh conditions, and large international brands sourcing from this factory are  pushing manufacturers to treat better their employees but also to reduce costs which can sometimes be contradictory!

The largest migration in human history :
The 130 millions migrants represent about one quarter of the population in large cities like Beijing or Shanghai and supply manpower to the huge industrial area of Southern China [even if  with the crisis of Chinese exports, some 20 million migrants had to return recently to their villages].

Their profile has changed much in twenty five years: at first, seasonal jobs in the cities to survive. It was “unpopular” for girls; this is not the case with the current generation, younger, better educated, who move out of the countryside because of poverty but also of the attraction of cities:

“The shame no longer is in the fact of leaving the village but in staying there.”

For a long time, migrants without a residence permit had trouble with the police; in recent years, the situation is stabilized. But the villages are empty, parents or grandparents run family farms and care for young children; there is no choice, the plots are too small for large families.

Women integrate more easily to city life, they represent one third of migrants, often young and single, they want to progress more than men,

“Rural-urban migration represents for them the prospect of a huge life change”.

Ups and downs in the lives of Chunming and Min …
Leslie Chang followed two young women in Dongguan for over three years. A graduate of Harvard, after a stay in Prague, she is, since 1993, a correspondent for the Wall Street Journal in Hong Kong, in Taiwan and then China. She begins to investigate for her newspaper in the Guangzhou area and finally was full time on writing this book. She now lives in Colorado with her husband, journalist Peter Hessler (who wrote two very Interesting books on  China).

Very close to her heroines, she knows the village and the family of Min; despite the constant change of jobs of these two women, she managed to keep in touch.

This is the great merit of this book: it is not ment to be an economic, social or sociological  study but tries to make us understand their perspectives on their own lives.

They have a very strong desire to progress, they do not complain of their condition; feminism, politics do not exist; the Communist Party is never mentioned, the world is what it is and one can only rely on oneself.

“Going to school, work in town a few years and then go back to the village, get married and have kids … If life, it is just that, well, it’s not worth the trouble,” said Min .
Ups and downs, the belt work, secretarial work, then a commercial job in a financial pyramid which was a failure, the steps of their career are accompanied by a continuing training effort in all areas. Girls are often less educated than boys, encouraged by parents and who attend school longer, but they want to move forward, out of their environment.

A survey shows that in a 4000 factory workers in Shenzhen, one third enroll in evening classes, in great majority girls!

The environment can be dramatic: theft, work accidents, unpaid wages, various frauds, organized crime, prostitution … but sometimes the hardest part is finding a proper style of relations with parents and finding a husband.

In the village, the parents and a husband …
The ideal man is 1.70 meters (essential!) and he is a homeowner. To meet him, the methods range from the village matchmaker (parents prefer that their daughter  gets married in the neighborhood), friends at work, clubs and even Internet dating.

Traditionally the bride  lives in the family of her husband and she must obey her stepmother. Things change, young couples pay their wedding themselves and often settle in the city, far from the parents that they will see only during New Year celebrations

The parents are not happy with this situation but cannot impose their will because the money of the migrants has become the main source of income for villagers. Young people have the money and gifts to show it to the people back in the village.

This is largely developed by the novels devoted to migrants: optimistic and a little unrealistic such as “Miss Chopsticks,” the latest book by Xinran  (P. Picquier 2008) or darker novels such as Liu Xinwu,  published by Bleu de Chine. But it is surprising that a phenomenon of this magnitude has not attracted more literary developments. 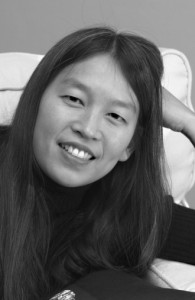 Leslie Chang said that she also is a migrant. To follow tradition, she investigated the history of her family and visited Manchuria where her  parents come from; this approach is interesting but we can regret that it occupies nearly one quarter of the book. Sometimes we are surprised by some hasty generalizations, and by just a superficial view on the life of the village of Min and the absence of minorities (specially Miao); many of them work in the area.

But Leslie Chang did not claim to be exhaustive and has a talent for highlighting the significant detail and to position herself in a very friendly manner with the two young ladies.

Her book, which was a success in the U.S., is an important document to understand the astonishing vitality of this region of the world.