“The Myth of Meng”, a book commissionned by a publisher: Su Tong is well known in the English-speaking countries where he has been well served by the translator Howard Goldblatt. Therefore, the publisher Canongate Books, which publishes a series on myths revisited by contemporary writers, has commissioned a book on the myth of Meng (Binu). This book has been very successful in China in 2006.

Su Tong explains in his preface to the English edition: “The qualities of imagination, the most beautiful and least inhibited, are those of ordinary people. To a large extent, I wrote this book to imagine again the emotional lives of these people which together form a sort of popular philosophy. “

Meng’s husband has been forced to work, like thousands of other peasants, to build the Great Wall . The king has forbidden t to cry, tears of Meng flow from her whole body except from her eyes ..!

The novel  turns to a fairy tale. To bring a winter coat to her husband, Meng sets off with a frog, a blind woman, reincarnated in search of her son … as in good video game, step by step, the most difficult obstacles do not prevent her to finally approach 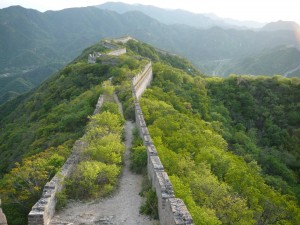 We allow ourselves to take all these twists and turns, but the somewhat schematic  character of Meng ..who knows only crying, is of little interest. The end of the book is worthy of a blockbuster movie.

Su Tong was born in 1963 in Suzhou, a cultural capital of China. A family of four children , the father an executive, the mother a worker, have no connections with the literary and artistic circles of the city. His real name is actually Tong Zhonggui , Su Tong is a diminutive for “Tong Zhonggui from Suzhou”.

He studied Chinese literature at Beijing Normal University, and published as from 1983,  poems and short stories in several reviews. After a short period in a high school, he became the editor of “Purple Mountain”.

The publication in 1987 of “The exile of 1934” (translated in English only) made him known as one of the representatives with Yu Hua of the avant-garde. He is close to Yu Hua, with whom he watches all the videos available, and considers ( rightly in my view ) that “Wild Strawberries” by Ingmar Bergman is one of the finest films in the world.

International recognition came in 1990 with his novel “Wives and Concubines”  (pub. Flammarion), and especially the film by Zhang Yimou . In China, the large walled estates of the Qiao clan (near the town of Pingyao in Shanxi Province) in which it was filmed still draws a huge number of visitors, even if other estates in the neibourhood are nearly as spectacular!

Three other novels will be adapted for the cinema but without the same success, “Painted Face” was published in France by Philippe Picquier like “The Lives of Women” which inspired the screenplay for the movie “Jasmine Women,” a great success in Asia in 2004 with actresses Zhang Ziyi and Joan Chen.

As for “Rice” (Flammarion ed), perhaps the best novel by Su Tong, the film that was shot experienced a chaotic history. “Dong Rice Shop,” filmed in 1995, was blocked for seven years because it showed too much the  “negative aspects of human nature.” In 2002, everything seemed to be solved, but the posters a bit “suggestive” used to launch the film, brought again a ban!

The success of “historical” novels :

Su Tong is one of ten writers most critically acclaimed in China and is especially loved by the public.

He writes novels that show different periods: the emperors of China (“The Myth of Meng” and” I am the Emperor of China “), the end of the empire (” Raise the Red Lantern “), the beginnings of Maoism (“Painted Face” and “The House of Poppies”), the recent period (” Rice “). His goal, even if he denies it, is to tell stories and capture the interest of the reader.

“I am the Emperor of China” (ed. P. Picquier, 2005) is intended as a fiction; no dates, no precise setting but the environment of Imperial China. A child comes to power, initially survives the intrigues, satisfies his instincts of cruelty and sadism.Overthrown, he leads the life of an ordinary man, which will save him when the imperial family is murdured.

He becomes a tightrope walker, a beautiful metaphor for a fragile life. You think that you read a film script: between two trees, he stands on one leg and meditates during the night the Analects by Confucius!

With Su Tong, the political phenomenon has virtually no room; however, family conflicts, very rough human relationships and a close look on  the sexuality of the characters have been able to attract some criticism. He is very pessimistic: man is a wolf for man; in this respect he is not politically correct. He also protested against the present phenomena of literary marketing and the success of martial arts novels (wuxia).

His qualities as a storyteller are quite obvious in his short stories. Two collections were published: ” Paper Ghosts” (ed. Desclee de Brouwer, 1999) and more recently in English,” Madwoman on the Bridge “(ed. Black Swan, 2008). A new novel “Check,” about the consequences of the Cultural Revolution was announced, in English for this year.

Photos: The Great Wall (Julien Mialaret), and  the set of the film Raise the Red Lantern (DR).