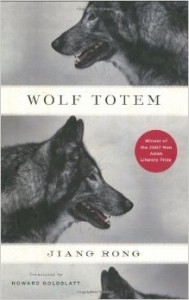 A major work of the French director, the film only partially reflects the spirit of the book that inspired it, “Wolf Totem” by Jiang Rong, the biggest bestseller in China after the “Little Red Book” of Mao Zedong!

During the Cultural Revolution in the 60s, two young Chinese students, Chen Zhen and Yang Ke, are sent to Inner Mongolia to “educate” the nomads. But it is their life that will be transformed by discovering the complex relationships between wolves and nomads; a precarious balance that will be broken by the will of a political officer to develop intensive sheep breeding, cultivating the steppe, and to achieve this, destroy the wolves.

Chen Zhen will take from a den a young cub; he wants to raise it, but it will never accept his captivity. We will learn a lot about the steppe and it’s vulnerability, a fragile grassland that can be destroyed by too intense breeding by sheep or horses and especially gazelles and marmots when their number is not regulated by wolves.

Wolves, stars of the film

As in other films by Jean-Jacques Annaud, about bears or tigers, wolves are the heros with the sublime landscapes of Inner Mongolia. Some sequences are stunning, particularly the attack of wolves bands against a herd of army horses during the night in the blizzard and using drones for some shots. The same goes for the hunt of  a group of gazelles.

The film manages to effortlessly capture the attention for nearly two hours. The music composed by James Horner (“Titanic,” “Braveheart”) points out, sometimes a little too much, the twists of the script.

A blockbuster is inconceivable without a sentimental story, that of  Chen Zhen with the beautiful daughter in law of the Mongolian guru of the two students; a romance that barely exists in the book by Jiang Rong that inspired the film. 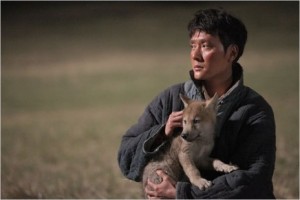 Such a superproduction should have a happy ending, which has nothing to do with the reality of what has happened to Inner Mongolia, forty years later, with areas devastated by coal mines and valleys becoming deserts and generating dust storms that even reach Beijing.

It took seven years to make this film, a Sino-French co-production, funded 80% by the Chinese . The rights of the book, which after the “Little Red Book”, is the biggest success of Chinese edition (5 million copies sold, perhaps 15 million pirated) are purchased in 2004.

Jean-Jacques Annaud was contacted because of his filmmaking notoriety after twelve films and hits like ” The Name of the Rose”, “The Lover” and his ability to shoot with animals (“The Bear” and tigers in “The Two Brothers”). The filmmaker was at that time in trouble with the Chinese authorities after a film, “Seven Years in Tibet” (1997). He was explained that this incident is nowforgotten and Jean-Jacques Annaud points at will that he was under no pressure in China and has had carte blanche.

He seems to forget, as recalled by The Economist, that he had, in December 2009, to justify himself in an open letter in Chinese, and emphasize that he had never supported the independence of Tibet or had personal relationships with the Dalai Lama.

A shooting in harsh conditions 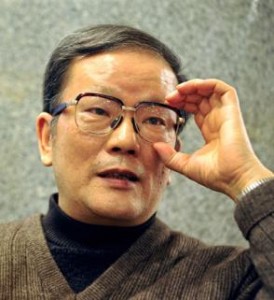 First a couple of weeks in Inner Mongolia to find an unspoiled area accompanied by Jiang Rong, the pseudonym of Lu Jiamin, the author of the book. Shooting begins in July 2012 and covers the four seasons; almost the entire film is shot on site with very important means: a budget of $ 40 million, a team of 480 people and 8 foreigners; very big problems with the cameras in the cold and in summer with clouds of mosquitos.

The main problem … wolves. They should be tawny Mongolian wolves, which were selected in different zoos. Twenty wolves had to be tamed and this requires to bring them closer to humans as soon as they open their eyes. The trainer, Andrew Simpson, a Scot living in Canada, will move to China with his partner and six people for three years.

Additional difficulty for the filmmaker, wolves, unlike the two tigers (“The Two Brothers”), do not actually have personalities, if we exclude the Cub raised by Chen Zhen. The actor who plays this character, Feng Shaofeng, is well known and his performance is outstanding but he is not a super star that fills the cinemas on his name.

The first echoes of the film in China are promising, but what is a million tickets sold at Chinese NewYear in a market of 30 000 movie theaters (that is to say, six times France) which is the second largest in the world after the United States.

Betrayal of the book?

The film does not really do justice to the major themes of the book.

“Wolf Totem” is a heavy book, long, too didactic and has not benefited in China of a good editing job. However, this novel, largely autobiographical, which has just been republished in France, puts forward in  China new and important ideas.

The film for sure underlines the ecological issues and the struggle of men and nature, but partly evades the real interest of the book, particularly for minority cultures and specially Mongolian; this real respect is exceptional in China.

Similarly, the underlying political issues are important and especially the conflict between Mongol cattle breeders and Han farmers. The Mongols are wolves, as shown by their territorial conquests in history and their periodic control of political power in China.

We understand why the book was almost censored:

“The Hans had they not gone through much of their history with a day to day living, entrenched behind the Great Wall, begging peace through marriage or tribute, when it was not simply by surrender. And the worst thing is to rely solely on reproduction to perpetuate the race. “(P.153)

For conservatives, the author is a traitor

It may be noted that this passage, like others of the same style, are not included in the English translation by Howard Goldblatt, published by Penguin in China!

The Chinese, farmers and sheep, victims of dictatorships for millennia, must become wolves, says the book. A people without a spirit of freedom is easily dominated.

This theme was taken up by Chinese entrepreneurs who struggle in the international competition. But for the ultra-nationalists and some conservative intellectuals, the author is a traitor and they refuse the benefits, although limited, given to non-Han ethnic groups, and develop nationalist and racist themes.