The previous article dealt with Li Ang’s career and the short stories available in English and French. We will now comment on her three translated novels (1,2,3) which had a great impact.

After a stay in the United States and a degree in theatre studies at the University of Oregon, she met the great novelist Bai Xianyong in California and read in “Anecdotes of Old Shanghai”, the true story of a woman who killed her husband. Back in Taiwan, she published short stories and wrote a column in the China Times entitled “Women’s Opinion”.

In 1983, release of ” The Butcher’s Wife” which was awarded a major prize, that of the United Daily. The book was quickly translated by Howard Goldblatt and was noticed in the West.

Unlike in China, in Taiwan, under the dictatorship of Chang Kai-shek, it was not until 1970 that the traditional role of women in a patriarchal society was challenged; this society defended itself and feminist Lu Xilian (4) was sentenced to prison in 1979.

Li Ang considers her book to be a feminist work, but does not want to be marginalized as a feminist, she is “concerned less with feminity than with humanity”. For H. Goldblatt, it is “the most frightening book ever written about women oppressed by men”.

The novel created multiple controversies and even put Li Ang on bad terms with her father. It was considered that the murder of a husband by his wife is an unnatural act that can only be explained if the woman is manipulated by a lover. But Lin Shi is not presented as a monster but as a victim! 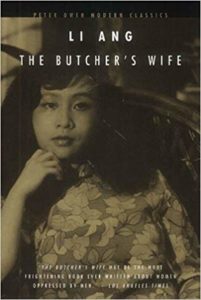 At the death of her father, the young Lin Shi was 9 years old; the uncle took over their house and her hungry mother was raped by a soldier in exchange of two balls of rice. A few years later, Lin Shi was married by her uncle to a butcher, Chen, very skilled but bestial with women.

The novel tells us about their relationships, especially sexual ones, because she is only an object in Chen’s house who regularly brings the uncle pork meat, an “exchange”.

The couple’s relationships, quite noisy, fascinated the neighbours who did not support Lin Shi, who was gradually starved by her husband when she did not behave as he wished. Hunger is in the book very closely related to sex.

The novel depicts the life of the village, the superstitions used as a weapon by her0 neighbour A Wang Gang who spends her life spying on Lin Shi. It is a gloomy, very well composed, written without side lines with great violence; we are delighted when we read the last paragraph!

Women do not support Lin Shi who is executed, falsely accused of having a lover. In 1993, a similar event took place in Taiwan with a “betel nut beauty”, a woman who sells betel nuts but not only… Contrary to what some journalists had written, this woman had not read Li Ang’s book. Lobbying by feminist groups led to a lenient verdict and in 1998 to a legislation on the prevention of domestic violence.

– “Dark Night” (2), a woman cheats on her husband without remorse:

Huang Chende is 45 years old, he has been married for 22 years with Li Lin, they have two children; he has a friend Ye Yuan, a journalist who provides him with confidential information that has allowed him to earn a lot of money on the stock market. Huang Chende has affairs that last for a short time and do not worry his wife.

Li Lin becomes Ye Yuan’s mistress, a very pleasant relationship, but she will have to abort. Chen Tianrui, who wants to launch a movement of moral purification, informs Huang Chende of the situation and the affairs of Ye Yuan who is also the lover of a journalist, Ding Xinxin;  Chen Tianrui was madly in love with her at university. He advises Huang Chende to take revenge on his wife and Ye Yuan.

A lot of hypocrisy in characters who are not always very interesting and analyzed in a rather basic way; we know nothing about the relationship between Huang Chende and his wife! As for the introduction of Chen Tianrui as a moralist, it makes it easier to develop a novel that shows little dramatic progression.

Li Ang was interested in the stock market but hardly talks about the real estate and the corruption that made her heroes’ fortunes. The novel also highlights the paradox of a very advanced society in which Confucianism remains powerful and astrology still plays a major role.

– “The Lost Garden “, a large park in Taiwan’s history:

Rose Zhu’s father lives in the “water lily garden”, he is in his forties but has been sick for a long time. He is very close to his daughter Rose or rather Ayako, her Japanese first name. Her two brothers studied medicine in Japan and then in the United States. Japanese culture, the history of the city of Lugang and the ancestors of the family (pirates, aborigines, Dutch and Fujian Chinese) are important themes in the book.

Her father is arrested, Security Police question the little girl several times. He is released due to his state of health. After graduating in Japan and staying at a research center in the United States, Rose became in Taipei, the assistant to the CEO of her uncle’s company.

At a dinner party, she meets Lin Xigeng, a successful businessman; he is married and has three boys and two girls from his two marriages. He has no interest in his family life and had many mistresses. Lin comes from a large, rural, Catholic family in the south of the island. He buys land and sets up operations. An authoritarian man, a little unstable, who refuses to let a woman interfere in his life. 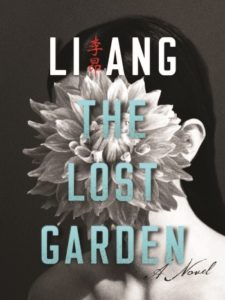 A stormy affair with Rose, often with misunderstandings, but she is very much in love, “I realized that I was beginning to lose the ability to judge or decide by myself, that I was relying entirely on him” (p.75). Li Ang mentions their sexual relations, which is one of her favourite topics. She emphasizes the role of female desire, a theme rarely addressed in Chinese and Taiwanese literature of the time.

Lin’s need for domination leads to a rupture. Rose meets Teddy, one episode a week of sexual satisfaction, but she finds that she really loves Lin. This affair with Lin is a little chaotic but, pregnant, she will finally marry Lin who agrees to divorce.

Rose’s father squandered the family’s money, buying a big luxury car and more than fifty cameras. The garden is abandoned. The family’s good land was redistributed during the land reform, but the father kept uncultivable land near the city centre. The garden of her childhood will be restored to its original state thanks to the photographs taken by the father; it will be entrusted to a Foundation and not to the government that has done so much harm to her family.

A very clever composition with constant moves between the past and the present; a past where we are given a part of Taiwan’s history. A magnificent evocation of a beautiful garden that is the setting for the education of a daughter from a rich family. Regrets for a Taiwan that will disappear.

The garden and real estate are two separate things, but Li Ang insists on real estate development, which has done so much to enrich many Taiwanese. Rose’s social background does not lead her to take an interest in the social environment, while Lin is a predator, but his relationship with Rose is complex and credible.