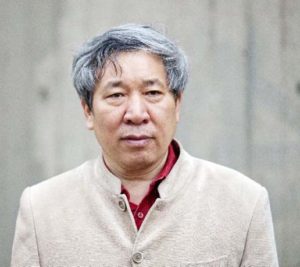 Yan Lianke is one of the most important contemporary novelists, for sure a potential candidate for the Nobel prize. Nine of his books have been published in France by Les Editions Philippe Picquier. More English translations have been released with Carlos Rojas, a professor at Duke University, who has translated five of his novels. In just a few months, “The Day the Sun Died” (1) has received flattering feedback from all over the world.

This novel was published in Taiwan in 2015 and like the vast majority of Yan Lianke’s works, is censored in China. In 2016, the book was awarded, in Hong Kong by an international jury, a prestigious prize for a novel written in Chinese (2). A French translation, “La mort du soleil” by Brigitte Guilbaud who, with Sylvie Gentil, who recently passed away, has translated Yan Lianke’s novels with talent, will be available in a few months.

– A night of tragedy:

It is not a historical portrait like in other of his books or a realistic or mythical narrative, even if death everywhere reminds us of the Cultural Revolution. In the large village of Gaotian, in central China, a fifteen-year-old boy, Li Niannian, will tell us, in eleven chapters, this incredible night. Niannian is neither particularly bright nor educated, but he has a sense of family and responsibility.

The first cases of sleepwalking occur at nightfall, the first deaths also happen when elders drown in the canal, often farmers who want to continue harvesting their wheat, “when people are dreamwalking, they only see the people and things they care about, and it is as if nothing else exists” (p.23). 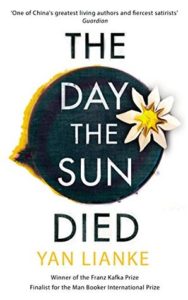 Similarly, Niannian’s mother, sleeping, continues her work of paper cutting for the funerals. The family operates a store, “The New World”, which sells items related to death and makes a comfortable living from them. Funerals are the subject of violent controversy because cremation is now mandatory, something that this rural society is not prepared to accept. The rituals surrounding death, the coffin, the grave, are essential elements of this civilization.

Cremation must be imposed even if traditional funerals are not possible in cities due to lack of space in cemeteries. This involves conserving arable land or transforming funeral sites into agricultural land. In Zhoukou in Henan (Yan Lianke’s province), the bodies must be moved after a cremation free of charge. In Jiangxi province, bonuses are awarded to families who transfer the coffin to the funeral service.

In our novel, Niannian’s father, Li Tianbo, systematically informed against the families who held funerals and received 400 yuan from his wife’s brother who runs the crematorium. The latter would forcibly recover the coffins by eventually blowing up the graves. The ashes of the deceased are given to the families, but the oil from the bodies is kept by Li Tianbao in barrels.

Yan Lianke, a character in the novel:

The novelist is very close to Niannian who reads his books but hardly understands them and cannot quote them correctly. Yan Lianke is a Gaotian celebrity but the writer is very concerned about his inability to write new stories, he is getting old, he is withdrawn. In his sleepwalking, inspiration overcomes him but abandons him as soon as he wakes up; this extraordinary night will provide him with a major topic for his writings. 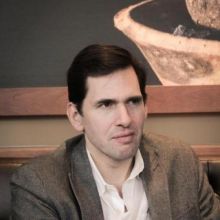 “Because they were dreamwalking, people died one after another. Not all of them committed suicide by jumping into a river or hanging themselves. Others had been cut down while robbing and stealing. Out in the streets, it seemed as though the footsteps of thieves and bandits could be heard anywhere, but it also seemed as though there wasn’t anyone there at all” (p.147).

The arrival of villagers from the surrounding area has accelerated looting. These peasants are frustrated at not being able to become city dwellers and will go and help themselves in the shops in the village. The local authorities do nothing but banquet and putting on Mandarin costumes, forgotten by a theatre company, pretend to revive the Taiping kingdom.

Sleepwalking can lead to making amends. Li Tianbo wants to make amends and admits that he was the one who informed against these forbidden funerals; similarly, a neighbour admits to having poisoned her husband.

Li Tianbo and his son try to limit sleepwalking by providing neighbours and friends with a very strong tea that keeps them awake; they are the ones who will ultimately save the village and allow the sun to shine again.

Political criticism and diving into the depths of human soul: 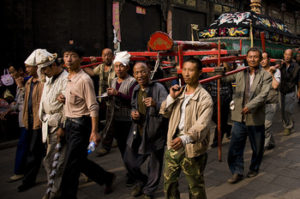 Several interviews with Yan Lianke allow the author to clarify his thoughts (3). This sleepwalking refers to Xi Jinping’s “Chinese Dream”, even if he indicates that “the personal dream is more important than the national dream”. “The country is like a boat floating on the sea and you have no idea where it is going to float next. This is what makes Chinese people most insecure. Just like in the story, all the dreamers are very clear what they want to do but when they wake up, they do not know” (3b). “Because information is so tightly controlled, generations of Chinese have been dreamwalking through life without realizing it” (3c)

But at the same time, the novelist indicates that it is a dive into the depths of the human soul, in its darkness. Sleepwalking frees people from conventions and allows them to reveal their true personalities.

Just as Lu Xun in the foreword of “Cries” compared society to an iron house and tried to use literature to wake up his fellow citizens, so Yan Lianke sees “his writing, in other words, is like the blind man with the flashlight who shines his light into the darkness to help others glimpse their goal and destination” (Preface by Carlos Rojas). 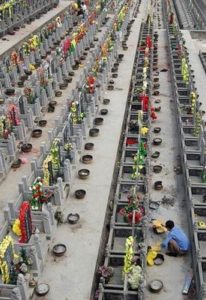 One night only, eleven chapters and sections that refer to the traditional time tracking system (geng-dian). A slow process; it is the logic of this night that keeps the reader awake without the need of many developments to revive his interest.

Few characters, the narration is done by Niannian and this intervention of a teenager makes these incredible episodes more acceptable. It is one of the writer’s talents in several of his books to share with us incredible, absurd or grotesque events by letting us believe that this is a normal process. Myth, realism or rather mythorealism, reality in China is so unlikely that it often defies acceptance.

This night is not treated like a fable; the novel is alive, the descriptions, the dialogues, the events catch the reader’s attention and the style sometimes gives the impression that the narrative floats like a sleepwalker. In my opinion, from a literary point of view, it is Yan Lianke’s most beautiful book.

He will certainly surprise us again. He announces (3c) a new novel “Heart Sutra” dedicated to religion. He is not a believer but religion interests him because “in China, the development of religion is the best lens through which to view the health of a society…Every religion, when it was imported to China, is secularized…What is absent in Chinese civilization, what we’ve always lacked, is a sense of the sacred. There is no room for higher principles when we live so firmly in the concrete”.

(2) “The dream of the Red Chamber award”, awarded every two years by Hong Kong Baptist University.