In Singapore, food can kill…in crime novels by Ovidia Yu. 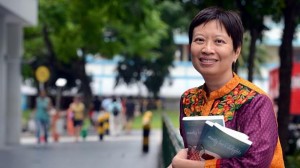 Asia is turning to be a real setting for crime novels. Everyone knows Inspector Chen and the Shanghai by Qiu Xiaolong, an excellent novelist. We have recently mentioned good novels in Malaysia with Barbara Ismael and Shamini Flint. We can now enjoy two novels by Ovidia Yu and meet Aunty Lee, a cook in Singapore and especially the Peranakan cuisine, one of the best in the world.

This civilization is the result of successful interbreeding between Chinese immigrants and Malay traditions both in Malaysia and in Singapore. This Peranakan culture was beautifully illustrated in 2010 by an exhibition of the Paris Musée du Quai Branly. In Singapore, one should not forget to visit the beautiful Peranakan Museum.

With both novels by Ovidia Yu, “Aunty Lee’s delights” and “Aunty Lee’s deadly specials” we discover an unfamiliar Singapore hardly known to expatriates or short-term visitors only thinking about shopping. The heroine, Aunty Lee, “was a plump Peranakan supercook who divided her energies between fixing meals for people and helping them fix their lives (wether they like it or not). As far as Aunty Lee was concerned, the two were different sides of the same coin. How could you feed someone well unless you understand them. “ 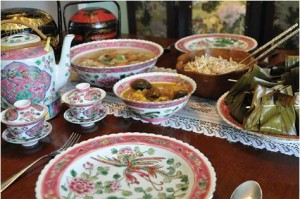 She is a widow with comfortable financial means, she could just be a “taitai” playing mahjong. But she does not lack energy and talent to develop her business. Food is essential for her. As said by Olivia Yu, “Food is the thing that unites Singapore.” Aunty Lee decrypts the characters in their approach to food, in their attitude to a buffet … The Peranakan cuisine is her area of excellence and an appendix of the novel lists “food courts” and “hawker centers” which are part of the attraction of Singapore and Malaysia as well as specialty restaurants in this Peranakan cuisine.

One of the famous dishes is chicken “buah keluak”, an Indonesian nut which, not prepared, properly, can be toxic. Two people are poisoned with a buffet handled by Aunty Lee for a  family that tries to save their heir with organ trafficking.

Ovidia Yu, a feminist, from theater to crime novels:

She was born in 1961, she is not Peranakan and moreover … vegetarian. Her father is Hokkien, born in China, a division head of the Ministry of Health; her mother, born in Singapore from a family coming from Shanghai, was during forty years a math teacher.

She began studying medicine but she soon gave up to the despair of her parents, to follow a course in English literature. Since 1987, she has written some thirty plays, some of which have been very successful and even rewarded abroad. Some of her 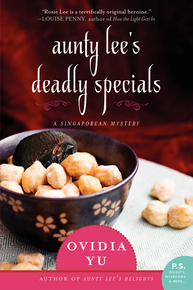 plays deal strongly with feminist themes and herself married for 26 years to Richard Chan an official, is considered as openly gay. She has two dogs, practises yoga and … learns French!

Her two novels include several gay couples, two lesbians in “Delight” and a gay couple in “Deadly specials” that prepare their union, their “commitment”. This is somewhat artificial because it is not really related to the plot, but it allows the author to criticize Singapore’s policy on the subject. What is rather unknown is that the Supreme Court of Singapore in October 2014 recognized the constitutionality of section 377a of the Penal Code punishing  with two years in prison homosexual activities. Of course in practice discrimination is limited, the local Gay Pride was attended by 26 000 participants and websites, bars and specialty clubs are not closed as in Malaysia; however, nine people were sentenced between 2007 and 2013 under section 377a.

Ovidia Yu resigned last July from the Singapore Literary Festival committee to protest against the decision of the NLB (National Library Board) to remove three children’s books considered by some parents as having a homosexual content.

The father of the nation, Lee Kuan Yew, who has just died, had on the subject a very conservative position; this does not prevent Ovidia Yu, like hundreds of thousands of Singaporeans to honor him, what was done in a very limited way in France, “If not for you, we would not be a nation but the state next to Johor. Thank you father. “

I especially liked “Aunty Lee’s deadly specials” that handles many issues including organ donation and links with the mafia which in China, organizes this traffic. The relationship between police and citizens in Singapore are addressed without too much complacency. The book is full of interesting notations on the social behavior of different communities. Similarly, the attitude towards migrant workers including Nina, the Philippine assistant of Aunty Lee, is analyzed. Cherril, a air hostess who now assists Aunty Lee, is also an endearing character. 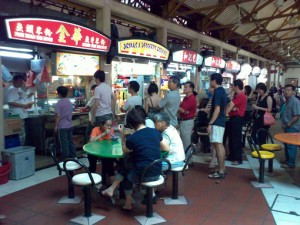 But there is no question of political novels as those by Qiu Xiaolong; no real criticism against institutions or government. She does not intend, and this makes us happy, to write a “thriller”, even though Aunty Lee is sometimes in danger. It’s a pretty special mix, captivating but too long with many repetitions. Psychological elements of some characters, such as the deceased husband of Aunty Lee, who is her constant reference, are recalled well too frequently.

But this novel has great charm and the criminal plot captures our attention. In short it is a book that is read with pleasure and which you savour specially when you know Singapore and Peranakan cuisine. Mouth watering while reading, we recall wonderful memories and we expect greedily the third novel which she just finished “Chilled Vengeance.”