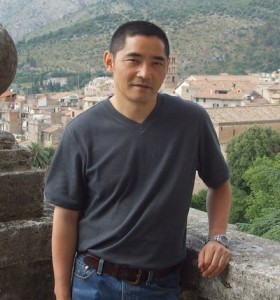 Su Tong is one of the best-known Chinese novelists in the West; nine books translated into French, a little less into English; only Mo Yan has been more translated. That is why we must congratulate the publication in English, a few weeks ago, of the short novel “Petulia’s Rouge Tin” (1). This superb text had already been translated into French in 1995 under the title “Visages Fardés“. (1).

Su Tong is best known for his novels that feature very different periods: China’s Emperors, “Binu and the great Wall of China”, a commissioned work to forget, and “My Life as Emperor”, a great fiction, the period of the war with Japan (“Rice”), the Cultural Revolution with “The Boat to Redemption” and the transition to capitalist China (“Tale of the Siskin”, not yet published).

These last two novels have won major prizes but one must not forget the essential place of short stories (more than 200) and short novels in the work of Su Tong. Good collections of short stories have been published in French (“Fantômes de Papier” (2), “A Bicyclette” (3)) and in English “Madwoman on the Bridge” (4). We will focus on the texts that came before “Petulia’s Red Tin” and made Su Tong famous.

Su Tong was born in 1963 in Suzhou; a family of four children, the father, an executive, and a working mother, have no connection with the literary and artistic circles of the city. He studied Chinese literature at Beijing Normal University. After a short period as a high school teacher, he became the editor of the magazine ” Purple Mountain” and began publishing. 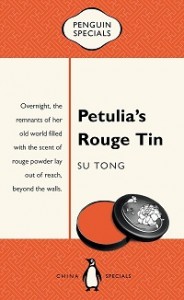 In 1987, he published two short stories highlighting a very personal style with “Flying over Maple Village” (5). Even if the translators do not agree on the type of trees of this village, walnut, maple, mulberry … it is an original text on the nostalgia for a native country that the narrator did not know but which was told to him by his grandfather. It was a time when, until the death of his little uncle in 1956, there were still fields of poppy flowers. Ghosts and demons live in the village, sometimes the animals speak…

A short novel, “Nineteen Thirty Four Escapes”, is available only in English (6). The narrator tells us about the story of his clan in Maple village during the disastrous year 1934 marked by an epidemic of typhoid. Grandma Jiang’s husband, Chen Baonian, has created a rapidly growing bamboo furniture workshop in town. The sense of family did not stop him from selling his little sister Phoenix to the landowner in exchange of five acres of land.

The epidemic kills five of Jiang’s children; she welcomes in the village Huanzi, the mistress of Chen Baonian, pregnant, who loses her baby, poisoned by Jiang. She will revenge herself by leaving the village with the new born baby of Jiang … Brutality of this past that the author does not justify nor explains, fatalism of the characters who submit to their destiny.

“Opium Family” (7) (8) published in 1988 is hardly more optimistic. This text tells of the peak and decadence of a large family of landowners in the years following 1949. The head of the family, Liu Lao Xia brought prosperity to Maple village, but the family is condemned by History with the arrival of the revolutionary Lu Fang, but also by it’s heredity, it’s defects …

– The portraits of women: 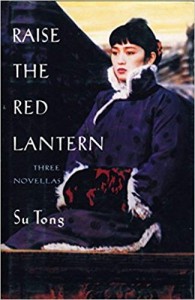 In June 1989, Su Tong published “Wives and Concubines“, which went unnoticed with the events of Tian Anmen, until the release of the famous movie “Raise the Red Lantern” by Zhang Yimou, with Gong Li, Silver Lion in Venice in 1991. A short, chilling novel, which everyone knows, in which is shown the oppression of women in a feudal society.

“The Life of Women“, is published in a journal in 1990. A translation into French (9) is available for this beautiful text that will be adapted as a movie under the title “Jasmine Women” with two famous actresses, Joan Chen and Zhang Ziyi.

The story of three women, from mother to daughter and grand-daughter. Mo is eighteen and dreams of becoming a movie star in the 1930s. She meets in her mother’s shop Meng, the director of a studio, that takes her as an actress but also as a mistress. Meng flees to Hong Kong with the Japanese invasion and Mo, pregnant, refuses an abortion. Her baby daughter Li will later marry a communist cadre but cannot adapt to their lifestyle. She adopts a little girl, Hua, whose life will also be a failure in the 1980s.

Patriarchal rules; one model, the couple and family life. Sterility, attempted rape, madness, all these elements certainly do not allow these women to participate in the construction of the new China!

– Two women and their “liberation”. 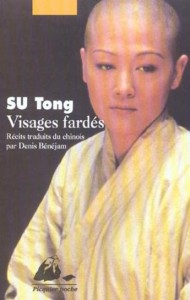 “Visages Fardés“, or “Petulia’s Rouge Tin” in the English version, is a short novel of 1991 that was inspired to Su Tong by a neighbor, an ex-prostitute. In November 1949, 2400 armed men close 200 brothels in Beijing and drive 1000 prostitutes in camps; comparable operations in many cities, including Shanghai.

In the alley of the Emerald Clouds, a truck takes the women from the Purple Pleasure Pavillon; two friends Autumn Grace and Petulia are the last to join the truck (10). They must go to a camp where venereal diseases are treated and are supposed to be rehabilitated by manual labor. Autumn Grace jumps from the truck and manages to escape. After recovering her jewelry from her boss, she meets Mr. Pu, a regular customer of Petulia. After a few difficult months with Mr. Pu’s mother, she wants to become a nun and shaves her hair by refusing any contact with Mr. Pu.

As for Petulia, she must sew jute sacks with great pain but refuses to participate in a meeting denouncing her former owner. After three years, her period of reform is over, she leaves the Center and goes to work in a bottle factory.

Mr. Pu’s property is seized but he manages to raise money for a wedding with Petulia, pregnant. Autumn Grace is not accepted in her village or in her monastery, rehabilitation is not a success! She will eventually marry a hunchback and welcome the son of Petulia who she will not take with her, following a man in the north.

These rehabilitated women do not want to live as simple workers, they have habits of easier and sometimes luxurious life, moreover they are constantly reminded of their past; the Revolution is not a success! They miss sexuality and men, this is very clear for Petulia. These women should be liberated by the New Society, but they lack energy. Xiao’e would agree to work in a factory but it should not be too tiring!

Men, as often with Su Tong, are weak and tend to run away; they never have the upper hand with women; a skirt makes them lose their senses! The two women adapt rather better than poor Mr. Pu who does not know how to live without his fortune in the New Society.

This short novel is a success and is read with pleasure. A simple construction that takes us from one woman to another and their environment. Su Tong is very precise about the details of the time, a period he did not know and which he shares with us without major recreating efforts. The characters interest him and all together he is quite positive about the way they lead their lives.

No political judgment, even if it is obvious that the New Society is not good for everyone and fails to rehabilitate and remove social prejudices that remain very powerful.

(10) In the English translation, Qiu Yi is Autumn Grace and Xiao’e is Petulia.