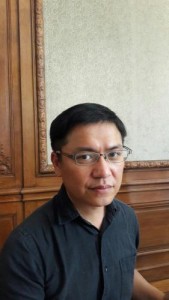 Wu Ming-Yi is now considered a central figure in Taiwan literature; we have already mentioned two of his novels, “The man with the compound eyes” (1) and ” The magician on the bridge” (2) highlighting their originality and their qualities. An important novel has just been translated into English by Darryl Sterk (3) who was already the author of the translation of “The man with the compound eyes”; “The Stolen Bicycle” is considered an event and has already won many prizes.

The novel shows us the talent but also the personality of the novelist: his obsession with ecology is obvious as his passion for bicycles; he even toured Taiwan on an old collector’s bike to promote his novel! A specialist of butterflies, the novelist evokes the industry around them and collages made with their wings.

His family is a central theme and there are many references to the Chunghua Shopping Center where the family worked and lived. Finally, as in other books, he immerses us into the history of Taiwan, Japanese colonization and aboriginals but underlines: “I did not write this novel out of nostalgia but out of respect for an era I did not experience” (p.371).

Nevertheless, the unifying theme of the novel is the search for a lost father whom the narrator hopes to find by his bicycles which were stolen or lost or abandoned.

-The bicycle, an “iron horse”:

The narrator, Little Cheng, whose name is only found at the end of the book, is a writer and has become like Wu Ming-Yi, a bicycle enthusiast. As his mother says, “Iron horses have influenced the fate of our entire family.”

The story of the family begins in 1905, after ten years of Japanese colonization, with the birth of the grandfather. The father is a tailor, the mother has given birth to four daughters, a fifth girl will be named A-mua (that is, enough!) Later, finally, a boy and some years later, another boy, the narrator. 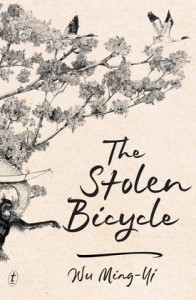 In one of his novels, the author mentions the disappearance of the father but a reader asks him to specify what has happened with his bike. No answer but it is this question that will give birth to “Stolen Bicycle”.

The narrator is interested in the history of cycling in Taiwan; Japanese imports and local manufacture of “Lucky”, the bicycle of his father. The novel gives us seven short chapters, “Bike Notes”, which are scattered throughout the body of the text, nothing will be spared …

Little Cheng is close to sellers, repairers, collectors of old bicycles and has himself a collection; his apartment is full of bikes that he repairs, which drives his girlfriend Teresa to leave.

He meets Little Hsia with a Lucky bicycle that is his father’s, but Little Hsia cannot sell it because it belongs to Annie, ex-girlfriend of Abbas, an aborigine. It is the long novel of the Lucky search that begins, where memories and objects are intimately linked.

He must get closer to possible collectors, gain their confidence, evaluate bikes and the parts that are not original, but especially approach the owners. A bike is more than just a means of transport: “When you’ve ridden a bicycle like that, really ridden it, it’s like a true intersection with another person’s life” (p.188).

He becomes friends with Abbas, visits his village and meets Old Tsou who is linked to the history of the bicycle; we are close to the missing father of Little Cheng and his Lucky. There is also Abbas’s father, Pasuya, a Tsou aborigine; Abbas will make a long trip to Malaysia and especially to Burma in the footsteps of his father.

– A symbol of success then a military bicycle:

These encounters immerses us into the history of Taiwan: the father of the narrator worked in Japan to assemble elements of aircraft. At that time, a bicycle was an element of prestige, luxury, which even had to pay a road tax! The war will turn everything upside down and the bicycles becomes one of the essential weapons.

The novel details the invasion of Malaysia by the Japanese in 1941 with General Yamashita, 60,000 men and 10,000 bicycles that could carry more than 35 kg of rations and ammunition. These bicycles, coupled with the errors of the English command, explain the speed of the Japanese advance and the capture of Singapore in February 1942, the greatest surrender of British military history. 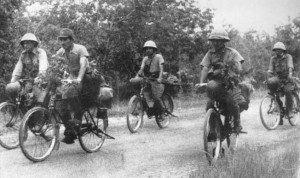 In 1942, the Japanese recruit Taiwanese to support their army; Pasuya will join the Japanese army during the campaign of Burma, a little-known episode of the Second World War, opposing from 1942 to 1945, the Indian Army, the special forces and the American Air Force, the Chinese army of Chiang Kai-shek and Japanese invaders (supported by Thai forces a Burmese resistance fighters)

Pasuya learns to live in the jungle, to manage elephants domesticated by Karens and finally will be one of the few of his Japanese unit to survive. Elephants are transferred to the Taipei Zoo including Miss Ma. They are protected by a Japanese director, Katsunuma, who will have to get rid of some dangerous animals that the US bombings may release. Miss Ma, hidden in a tunnel is saved; the Japanese in Taiwan literature sometimes have a good image!

– A writer who injects new life in his books:

“Stolen Bicycle” is very different from his previous books; the bicycle occupies a central place but captures our interest as a sociological and historical phenomenon, as a passionate target of a collector. Sometimes, we can find too long, too technical, developments on the repair of old bikes!

Similarly some episodes do not add much, for example the underwater diving of Abbas and Old Tsou, certain episodes of the campaign of Burma or animals in the zoo. We feel that the author does not know how to resist a secondary episode told with talent … 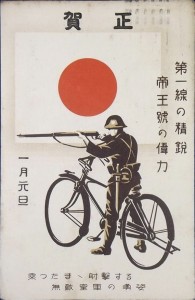 But we must acknowledge the literary quality, splendid descriptions, a very poetic style well served by Darryl Sterk the translator. The composition is complex and sometimes difficult to follow because the author continues without warning with previous episodes and with little progress.

Nature, the jungle, play a vital role. Soldiers are immersed and must defend themselves, it is the aborigines who adapt best. The characters are complex, the personality of the father is only a sketch but those of some collectors and of Abbas are attractive.

The author does well in the delicate exercise of elegant introduction of historical elements that are necessary but sometimes too complex (the Burma war). The novelist insists on the accuracy of the book checked by specialist friends; the same goes for the translator who has spent quite some time in Taiwan.

The novel shows us the complexity of the Taiwanese reality but also of its history, emphasizes the impact that one generally does not know in Europe of the Japanese colonization and the second world war in Asia. A remarkable book and for which we hope a translation into French in a near future.