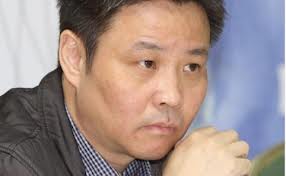 Yu Hua is best known for his novels, including “To live”, translated in 2003, and more recently “Brothers”(Anchor books, 2010). But short stories are an essential part of his work; a reasonable number has been translated, which allows to measure their importance and their evolution. That is why we welcome the recent release of “Boy in the twilight”, a collection of thirteen short stories, written between 1993 and 1998, translated into English by Allan H. Barr (1), his translator for many years.

1-Short stories about the life of ordinary Chinese:

This collection is very different from the first translated in 1996 by Andrew F. Jones (2) incorporating short stories written during the years 1986 to 1988. Texts of this period, under the influence of the Cultural Revolution, are cruel, bloody and cultivate a “modernist” style; they tend to explore all the possibilities of “how do we tell” and the influence of Kafka and Robbe Grillet can be noticed. 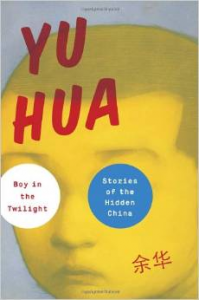 “Boy in the twilight,” focuses on the lives of ordinary Chinese people, usually in small towns,  nearly twenty years ago. Yu Hua does not speak about the enormous transformations of his country but about human nature and thus, these texts are still topical.

The narrator is detached and shows little emotion despite the brutality and cruelty of some of these texts. These short stories are all about families but focused on couples and underlining in three of them that the children are those who pay the heaviest price.

In “No name of my own,” an halfwit, Laifa could be a hero Lu Xun style; his dog is the only person who shares his life but he will be unable to protect it and it will eventually be eaten. “Boy in the twilight” is particularly violent: a boy steals an apple, he is caught, tied up … The seller actually takes revenge on his wife who abandoned him after the death of his son, drowned; quite a performance, a short story of ten pages. By cons “Timid as a mouse” which tells the story of a father and his son, the one not more brave than the other, lacks tempo and these thirty-two pages are hardly convincing.

Five short stories concern relationships within a couple. “Victory” tells us about the strategy of a woman who wants to avenge her husband’s infidelity. The husband will resist and chance will allow the couple to overcome their difficulties. In “Mid air collision,” a humorous story, of how friends meet again thanks to one of them, a ladies man; they must protect him despite initial reservations from their wives!

“Why There Was No music” is pretty depressing: Lu Yuan, Horsie’s wife, turned him away from his friends, transforms their apartment in an exhibition of her portraits. A borrowed video shows him his wife’s infidelity with one of his friends. No drama, Horsie is not really concerned, relations will continue … 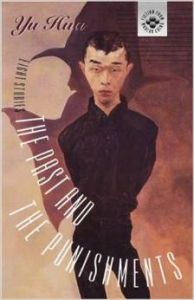 The brutality of the social relations are exposed by these short stories, in a society without justice; these issues do not create difficulties for Yu Hua who never criticizes directly either the political system or the Party. He has a real talent to avoid crossing the yellow line. And when he knows this will happen, for example by a very moving evocation of the crackdown in Tiananmen Square, in the first essay “People” of his collection “China in Ten Words” (4), the book is not published in China. For literature, the system is a bit more permissive and his novel “Brothers” was not censored, the same goes with his latest book “The seventh day”, published in June 2013.

You should read the articles by Yu Hua in the New York Times (also translated by Allan H. Barr, a professor at Pomona College in California). He comments with talent topical events of his country. He is talking about internet, censorship, the legacy of the Cultural Revolution, food fraud, counterfeit … He underlines that the style of these essays must be quite different from what he uses in his novels, yet for his latest book, “The seventh day”, he was accused of using a style non adapted to a novel.

Published in June 2013 and initially a great success; 700,000 copies reserved before the release of the book. This is a tour of seven days, a tour by Yang Fei the hero who died in an accident. Unable to pay a very expensive cemetery, he becomes a wandering soul who will meet other souls who could not be buried. These peregrinations highlight the absurdities that are common to the Chinese daily life.

Critics were acid: he is blamed for describing recent and widely known events and his book is said to be a collection of short stories rather than a novel. The characters are rather weak and serve only to keep the short stories into a more or less coherent book. The style has even been called language blog … Readers have been waiting seven years for this novel but they had to wait even longer for “Brothers” and did not regret it…