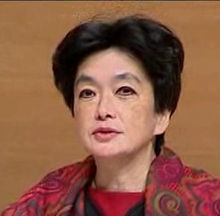 Since 2008, Anne Cheng, a former student of the Ecole Normale Supérieure, leads in the Collège de France her research and teaching activities on the intellectual history of China, after having carried them under the CNRS and the National Institute of Oriental Languages ​​and Civilizations (INALCO).

Her translation of ” The Analects” of Confucius and her “Histoire de la pensée chinoise” have become classics. She was kind enough to analyse current events in the Confucian Chinese world, in the West and in France.

Rue 89: One is struck by the news flow of Confucius in the Chinese world: statements by intellectuals or politicians, books, websites, statues on university premises, blockbuster movies …

Anne Cheng: This development is clear in the last ten or fifteen years but it changes, becoming an instrument for a political discourse that takes also over the imperial past of China . After the utopian frenzy of the Cultural Revolution (1966-1976), it was necessary for leaders to restore legitimacy and, following the Tiananmen Square massacre of 1989, to stress the necessity of the one party system as a cement for the nation and a guarantee for the integrity of the Chinese territory. Political legitimacy as well as ideological, the communist system being replaced by the worship of money. This was not enough, the glorious past of imperial China is sought after and it is in this context that Confucius is taken as one symbol of that glory and imperial unity.

Statues of Confucius are put together after having been demolished with sledgehammers during the Cultural Revolution; he became the symbol of the so-called “national studies”, the basis of which is Confucianism, but may include “philosophical Taoism “and some parts of Buddhism, in short all that is consensual and recoverable in the Chinese tradition.Confucius was chosen as the symbol of the ideological and nationalist takeover for the Chinese domestic consumption but also vis-à-vis the international market.

Is this “rebirth” limited to some some intellectual circles, or is it much wider? From what I have observed of the major changes in Chinese society from my position both inside and outside (being born in France from Chinese parents and proud to claim myself as a daughter of the French Republic, but also married  to a Chinese from mainland China), there has been during the Maoist period, a clear transformation in the male / female relationships and in the relationship between parents / children. However, the real break comes from the one-child policy. The entire family, including grandparents, gives in to the whims of the “little emperor”, especially if it’s a boy, and now we also see more and more overweight children … Trying to tackle these adverse effects, the Confucian value of filial piety has been revived and appears everywhere … 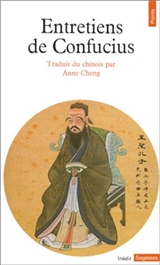 The pressure of the school system plays an important role to format the minds and puts them at an early age in a system of fierce competition. However, some elements of classical culture are reintroduced, such as learning by heart the poems of the Tang Dynasty (618-907) and in some schools and in a limited way, texts by Confucius and Mencius.

There are also private schools that claim to return to the classical tradition and are inspired by what was done in Taiwan, but they are limited in number, and more or less tolerated by local authorities.

In Singapore, some years ago, Confucianism and “Asian values” were a hot topic .

It’s mostly a 1980s theme that emerged during the economic “miracle” of the “little dragons” (Singapore, South Korea, Taiwan and Hong Kong). It should be mentioned that the notion of “Asian values”, as a factor of culturalist explanation of this economic miracle, was first issued by Western economists.

After the 1997 crisis, China has occupied the center stage, then the entire scene. In deciding to consider Taiwan as an integral part of China, the world accepts without protest and follows the attitude of the U.S. which are very dependent from China economically.Currently we have between China and the United States a sort of network of exchanges that the rest of the world calls globalization.

Many European scholars are still unaware that the Chinese elites are being trained largely in the United States where they are settling more or less permanently. For example, in the American university system, many departments are taken over by the Chinese from mainland China who have now surpassed those from Taiwan !

In addition, some U.S. universities open “branches” in China, this creates a “highway” of information and knowledge, almost a common market of people and ideas …

One gets the impression that despite significant resources, there are relatively few translations of Chinese in the U.S. …

In reality, the American sinologists translate a lot, but their work is confined to academia and to a limited audience, because there is not, as in France, a wider audience that has long been interested in China. 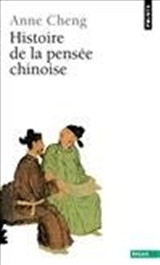 This is what has justified and allowed the creation of the collection of books that I manage with Marc Kalinowski for the publisher “Les Belles Lettres”.

This “Chinese Library” is in line with the values of the “Budé” collection of Greek and Latin works, and with their format which allows to provide the texts in classical Chinese, compared with the French translation with footnotes. Nearly a dozen volumes have already been published, the ambition is to publish four per year. This is a great challenge which a convinced publisher has supported. Some volumes are subsidized, including by the College of France, the mission of which is to defend the ” classical studies.”

We feel like pioneers in the field since even our American colleagues have not managed to get ahead, and our publications are beginning to be known even outside the Francophone world, specially in Spain and Italy.

The current slogan of the Communist Party of “harmonious society” and references to Confucius, is not it a way to evade the debate on democracy?

Yes of course, the “harmonious society” is a way to recover items of Confucian vocabulary, but giving a clearly authoritarian interpretation of Confucianism. In reality, this “harmonious society” is a rather paternalistic approach to consider the relationships between the rulers and the subjects.This also allows to ignore alternatives that are rejected by reference to a Chinese tradition considered as very essentialist, stressing that democracy is Western in origin and therefore totally alien to Chinese culture.

Nationalism in China is an important element, but outside China, the consensus image of Confucius continues to be used as a trademark of this “harmonious society” which the leaders would love to export and which sometimes is welcomed: in the United States, some groups emphasize that an education a little more authoritarian could produce well formatted citizens, with explicit reference to Confucian sources of which there are numerous English translations for at least a century.

The image of Confucius is an export value. Contrary to what is often said, the Confucius Institutes (fifteen already in France) differ from the French “Alliance” in that they are implanted in the heart of our universities which have tended to accept them favorably specially as the State tends to withdraw from funding for universities, particularly the Departments of Asian Studies. 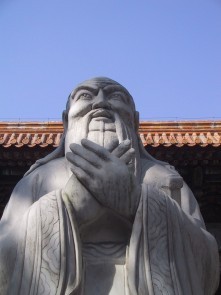 Behind the Confucius Institutes, there is an organization called the Hanban, a government agency responsible for the dissemination overseas of the language and Chinese culture in which it is easy to see one of the tools of Chinese propaganda.

Moreover, these Institutes hide behind the aura of Confucius to spread a certain image of China which is consistent with the official discourse, but which is also supported by the speeches we hear around ourselves about “Chinese otherness” and that allows many Chinese ideologues to return the message:

“It’s true, we do not think like you, we have a radically different tradition, therefore your democratic values ​​do not concern us …”

Is the interest in Confucius developing in France? There was the exhibition at the Guimet Museum and your lectures at the College de France, which have been attended by hundreds of people during three years …

My course meets the requirements of public services, but I’m especially glad that it is now available in a Chinese translation on the Internet, having received positive comments about what is considered an area of free expression. Similarly, a translation is provided into English, and many listeners already follow the course in French on the Internet.

When it comes to Chinese culture, the media know little other than Confucius, who they believe is a strong selling point! For my part, I try to ring a different bell than what one can read about Confucius and harmony …

The “Yu Dan phenomenon” is a good example: this woman of forty years, specializing in media communication, has made numerous television shows on Confucius with great success. The book, a by product from these shows, has sold millions of copies in China and has been translated in France under the title “Happiness according to Confucius.A small book to universal wisdom. “

It is not known that this book, because of its use of certain passages of ” The Analects” by Confucius in the context of official propaganda, was severely criticized in China and called “chicken soup for the soul”!

Little is said about the art of government according to Confucius, the straightness of the exemplary ruler who will impose himself  naturally and who morally legitimizes his power and authority …

These passages have been perhaps somewhat forgotten in favor of major themes in the official Chinese discourse. These are aspects of the Confucian teaching that can be embarrassing; one prefers to mention the authority of the leader before whom the people must give in without question, and that’s why I think the consensus created around the book by Yu Dan is not acceptable.

For my class next year, after the time of deconstruction comes the reconstruction: now that we have addressed the question: ” Was Confucius, as from the beginning, an invention? “, we will have to answer the following: ” Why is it he who was chosen to embody the unity and continuity of an entire culture? “