The Sino-Vietnamese war of February-March 1979 is forgotten despite the current tensions between the two countries, particularly with regard to the Spratley islands. A conflict evoked by Mo Yan in a short novel, “The Reunion of Companions in Arms” (1), a book of 1992 where Mo Yan shows once again the extent of his talent.

1- Mo Yan after the Nobel Prize:

The award of the Nobel Prize did not serve the literary work of Mo Yan. The political debate on the award, criticism very unrelated to his novels was fueled by the author’s blunders who accepted a role as promoter of Chinese soft power.

His statements welcoming the current anti-corruption operations which, it is said, will inspire his next novel, are not going to silence critics. And yet Mo Yan is not aligned with the politics of the Communist Party and this novel as so many others emphasizes his independence. Until 1999 Mo Yan is an army officer; he joined in 1976. However, this novel is a very clear criticism of the army and of the 1979war. It is certainly not a political pamphlet and some Vietnamese readers were puzzled.

Noël Dutrait who translated this book as so many great novels by Mo Yan and Gao Xingjian, is Professor Emeritus at Aix-Marseille University and the former director of IrAsia. During a trip to Vietnam a few years ago, he was surprised by the reaction of those who had read this book translated into Vietnamese and who were expecting a novel to the glory of the Chinese army and found a virulent criticism of war.

“The reunion …” is a book full of humor, short, easy to read even during a heat wave! In 1992, an officer, Zhao Jin, returns to his village. He is welcomed by a former companion, who is standing on the top of a willow tree, Qian Yinghao, who ” died in combat during the defensive counter-attack war of February 1979 “. He lived in tomb 780 among the 1207 graves of the cemetery of the “Revolutionary Martyrs”. 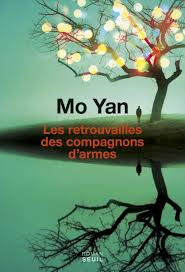 They evoke the past, the military qualities of Qian Yinghao, dead without firing a single shot. This one recalls their complicity in a comic sketch and his romantic relations with Niu Lifang, the presenter of the military troop.

Their childhood in the village had brought them together, their bathing, fishing for eels. Guo Jinku joins them; he was demobilized what he refuses to accept. Qian Yinghao tells them about the life he led in the cemetery without disrupting the living and his difficulties in trying to return to their village.

Smiling surrealism, the dead are among us; A magical realism in the style of Mo Yan. The composition is very elaborate: the return to the village in 1992, the war thirteen years ago and the life of the villagers of the village when they were twelve years old. The strength of childhood friendships, of shared life in the village is one of Mo Yan’s constant themes. Just as the role of animals; we remember the episode of the pig in “Life and death are wearing me out”. Here one evokes the fireflies that are gathered by the dead, “the fireflies are the lanterns of the ghosts” (p.48), one can pick up that light. The eel fishing party is a page of anthology (p.143-144): a set of tangled eels, the large eel that isolates itself, that will die and be eaten.

3- All the ghosts are heroes:

Â Qian Yinghao despite his military talents is criticized by his sergeant who finds that he does not make his bed properly! He also has some difficulty with the political instructor, of whom he does not accept “hypocritical gossip”; “Without his radical obstinacy, he would have been promoted  a long time ago” (p. 24). After his death, he is recognized retroactively as an official member of the Communist Party and can become a political instructor in the cemetery!

The ghosts wish to leave the Cemetery of the Martyrs but the hierarchy opposes it. And yet the life of a soldier was  much sweeter than that of the peasants who have difficulties to feed their children. Guo Jinku wanted to remain a soldier, “it was so good to be a soldier, you could watch movies, play basketball, do some tug-of-war …” (p.169). He wants to go back to the army, “stand guard, patrol, feed pigs, cook, anything” (p.171). 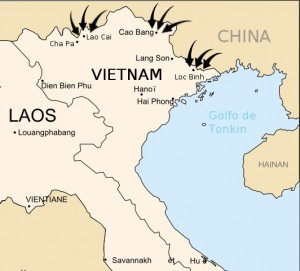 Sino-Vietnamese relations have normalized ; residents on both sides of the border are satisfied when trade is restored; “Your corpses are still warm but business is resuming” (p.51).

Huo Zhongguang sobs, “a crying soldier is an ideological problem” (p.52). He sobbed as a result of the normalization of relationships, he felt that he died unjustly. The head of the company, Luo, emphasizes that there are no eternal friends or eternal enemies, “if we had not fought, there would not be peace today” (p.69). Besides, we can not let him disturb the living!

And yet, this normalization is only partial. This one-month war on the border between the two countries will bring 200,000 Chinese soldiers against Vietnamese militiamen, the army being engaged in the military campaign in Cambodia against the Red Khmers (very close to the Peking regime).

Â Vietnam is supported by the Soviet Union, while Sino-Soviet relations are tense after the 1969 border conflict, the development of the 20th congress and Nikita Khrushchev’s policy of peaceful coexistence. The occupation by Vietnam of the Spratley Islands, claimed by China also played a role. The losses are heavy, several tens of thousands of casualties.

This war was followed by violent border incidents of short duration in 1984 (the Old Mountain). But the question of the Spratley Islands, partly occupied by China, which builds military bases there, remains very sensitive and is a source of tension aggravated by the claims by Philippines and Malaysia.

This conflict inspired a limited number of literary works. This is certainly not one of the most glorious pages of the Chinese army.

Yan Lianke, who became a secretary in the political department in 1978 and was expelled from the army after « Lenin’s Kisses » in 2004. In a collection of essays “Thinking of my father” (3), he explains his disgust of this war; young people died for nothing and a few years later, the leaders shake hands.

As for Bi Feiyu, this war has inspired him a great novel “Cotton candy on a rainy day” (2). Hongdu will die of psychological trauma related to the war after depression and madness. The villagers would have preferred that he dies on the front line as “heroe”!

These two texts emphasize the merits of the ” Reunion of companions in arms” and, if necessary, the fact that Mo Yan was not, as some have been writing, a Nobel prize at a discount. But we can hope that he does not express himself too much! To mention a joke, sadly up-to-date with Liu Xiaobo; “China has had three Nobel Prizes, the first cannot return (Gao Xingjian), the second cannot get out (Liu Xiaobo), the third is Mo Yan (” not speak “)”