Shanghai off the beaten track.

If you visit the Expo, do not rely on travel agencies if you want to discover lesser-known aspects of Shanghai that the few “must see”. During the Olympics in Beijing, I had suggested in Rue89, “literary walks” that received positive reactions. Unable to go to Shanghai this year, I still found some interesting information.

1 – The residence of pre-war celebrities:

The China Daily “(2010-07/02), offers eight ideas of visits of the beaten track, including some I already know.

The residence of Song Qingling, which is less spectacular than that of Beijing near the Houhai Lake. There is also the house where she lived with her husband, Sun Yat-Sen.

Prefer the residence of the great writer Lu Xun to his grave. As explained recently, the Mao Zedong’s takeover, led to a very solemn grave ( that he would certainly not have liked) and above all to a memorial in the same park.

The apartment occupied by Eileen Chang and her husband Hu Lancheng stands in a building of little interest, according to the pictures I’ve seen, but the posthumous triumph for this writer with the younger generation one day will lead to the  organization of a museum.

I do not know the residence in Shanghai of the famous actor, of Beijing Opera, Mei Lanfang , but I really liked his home in Beijing. Enjoy your stay and buy the DVD of Chen Kaige’s film about Mei Lanfang (“Forever Enthralled”) which shows how the performances of Peking Opera were held before the war.

I’ll try to visit in the future the residence of Ruan Lingyu, the great actress of the 30’s who committed suicide at the age of 24 years and who is presented in Stanley Kwan’s “Center Stage” (1991), a great film with Maggie Cheung.

2 – “The Peony Pavilion”, a performance in Zhu Jiajiao:

An article in The New York Times (2010-08/17) introduces a representation of the famous Kunqu play “The Peony Pavilion” by Tang Xianzu. Because of the Expo, there are even two different performances in Shanghai, one in a theater, the other outdoors in the botanical garden in the village of Zhu Jiajiao in the suburbs of Shanghai. 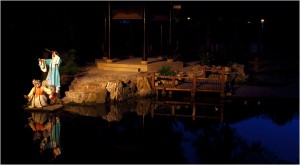 Outdoors, in a beautiful setting, is performed a “modern” and short version (70 minutes) of this opera which includes normally 55 acts which are represented on several evenings. A new musical score was composed by Tan Dun, a composer famous for his film scores (CrouchingTiger and Leaping Dragon, Hero …) and his opera “The First Emperor”.

Performances are on weekends until October and tickets are on sale on http://ccm.culture.sh.cn/english.

The Kunqu plays are quite different from the Peking Opera. Kun Qu style (after the city of Kunshan around Suzhou) was born in the 16th century and the play itself (Mudanting) dates from 1598, written by scholar-playwright Tang Xianzu, the year of the first performance of “Romeo and Juliet” in England. The author, whose career as a Mandarin was cut short by his impertinence, has written only a few plays, but this one is the most famous of the Ming Dynasty.

A story of dreams, love, death, resurrection from Du Liniang and Liu Mengmei. As the author says “we do not know how to crystallize the feeling of love, but once formed, it can only deepen. The living may die from love, the dead can live from it. If it does not kill the one who lives, if it does not bring life to the partner which is dead, it is that love has not reached its highest degree “(1)

The success of the play has even surpassed that of the “Pavilion of the West”, the masterpiece by Wang Shifu. Beauty of the text and of lyric poetry; the part of Du Liniang, a girl of sixteen, was a major success for Mei Lanfang.

After the Cultural Revolution, the repertoire of Kunqu was disappearing, but several performances marked a revival:  20 hours and six evenings in New York as well as  Paris and Caen in 1999.

Then an adaptation in nine hours by the great Taiwanese writer Bai Xianyong in 2004. Forgoten is the massacre in 1998 by Peter Sellars, a famous producer, with all the decorative elements in transparent glass with screens and video; however, the music by Tan Dun was highly rated.

(1) quoted by André Levy in his translation of the play published in 1999 by Editions Musica Falsa for the Festival d’Automne in Paris.