Should we create museums of literature?

A museum of literature is an institution specialized in literature considered as cultural heritage. The idea is to promote knowledge about literature and its role in society. There are many museums around the world concerning writers, particularly in the United States and France but very few museums of literature. I had been interested a few years ago by that of Beijing, I just discovered the museum of Taiwan in Tainan, the ancient capital of the island.

The National Museum of Taiwan Literature was opened in 2003. It is housed near the Confucius Temple in an imposing building designed in 1916 by the Japanese architect Mariyama Matsunosuke who also built many official buildings in Taipei (including the presidential palace).

This choice emphasizes the importance that is attached to literature but the museum with its conference rooms, auditorium, hall, library is very (too) vast and one has the feeling that literature is a little lost in a such frame!

Exhibition rooms by themes, by periods without privileging the life and the work of the main writers of Taiwan. One wants to show that Taiwanese literature existed long before the arrival of the mainland Chinese and Chiang Kai-shek.

The literature of Aboriginal writers (14 tribes, 2% of the population) is particularly highlighted as is the literature (in Japanese) during the colonization period (1905-1945).

The comments, if I judge by the audioguides in English, are very general, quite disappointing and give little information about writers or their works … Certainly books, photos, manuscripts, some personal items are exposed but this is not the main goal. One want to talk about literature more than writers.

A lot of visitors and especially young people; admission is free and the museum is closed only on Mondays like most museums in Taiwan. Temporary exhibitions are regularly scheduled, for example on American literature.

In Taiwan, not many houses of writers are open to visit: in Tainan, the residence of Bo Yang, a good writer imprisoned on the Green Island in the 1970s; in Taipei, Lin Yutang’s home. A memorial in honour of the writer Zhong Li-He, a classic, was built in Menong, his hometown, 50 km north of Kaoshiung. 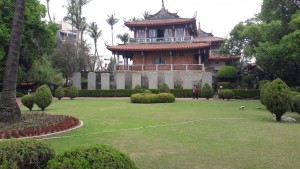 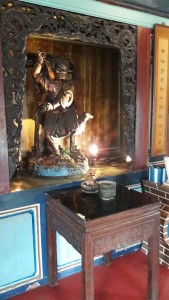 Taiwan is also particularly well endowed with temples celebrating Wenchang Wang, the god of culture and literature, especially in Taichung and Kaohsiung. In Tainan, in the complex of the Chikkan tower, besides a pavilion dedicated to Wenchang, one finds, which is rather uncommon, an altar concerning Kuiching, the god of the exams, with his ugly face, his left leg raised and his brush to list the candidates ..

– In Beijing, literary museums and a museum of modern literature.

You can visit beautiful houses of writers such as Lao She, Mao Dun, Guo Moruo and of course the Lu Xun Museum, but the most important is the Chinese Museum of Modern Literature. 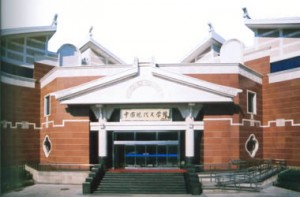 This building is located in Chaoyang District in North Beijing, massive and not very elegant. Its construction was undertaken in 1981 on the initiative of Pa Kin, at that time president of the Writers’ Union.

Very large collections, 300 000 pieces, documents, photos, furniture, souvenirs. A good chronological presentation that insists on the biography of the main writers and their works. The offices of several authors are even reconstituted. Many texts, comments that can translate into English students in charge of welcoming foreigners.

We are in a very clearly political museum: Jiang Zemin mixes his autographs at the entrance of the building with those of the writers Ye Shengtao, Bing Xin, Pa Kin. It is explained that China is one, but Taiwan’s literature is relegated to a small showcase and I do not remember that Hong Kong writers are mentioned.

The choices are clear: Shu Yi, the son of the great writer Lao She, explained that Liu Binyan and others related to the episode of Tiananmen would not be mentioned in this museum. 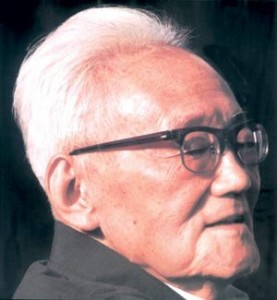 Shu Yi led the museum for many years, commenting on the official versions, especially that of his father’s “suicide” while his mother explained that she did not believe in it. The police refused the autopsy and did not give the body back to the family.

Paul Bady, translator of Lao She and one of his best specialists, is rather of the opinion of a suicide by the Red Guards. But for many in China as well as among the idolaters of Mao Zedong abroad, a suicide was very convenient and avoided to look for responsibilities and in particular that of Zhou Enlai who had urged him to return to China and did not really care to protect him.

As for Pa Kin, he did build a museum of literature but did not really fight for his project to build a museum of the Cultural Revolution; as he says, “Let us dare to proclaim the truth, and we will no longer swallow lies with such ease. It is only by engraving in our memories the events of the “Cultural Revolution” that we will prevent history from repeating itself “(p.118) (1).

(1) Pa Kin, “For a museum of the Cultural Revolution”, texts chosen and translated by Angel Pino. Bleu de Chine 1996