Suffering can lead to serenity: He is Red Guard in a high school linked to Tsinghua University, and his grandparents are from a bad “class origin” but his parents are just low level bureaucrats.

He leaves for Shaanxi, near Yan’an, as “educated youth”. His enthusiasm does not prevent an illness that left him paralyzed of the lower limbs.

Michel Bonnin in his book “Lost Generation” (1) refers to the short story that the writer creates from this period of his life “My Qingpingwan distant village”: a brutal confrontation between the revolutionary optimism and the village poverty and the illnes . But a lot of nostalgia for his youth: “I know that even if I had not become paralyzed, I would not stay all my life in Qingpingwan and even if my legs healed now, I will not return to live there all my life … but I am longing for this village, really. “

He returned to Beijing in 1972 and worked seven years in a factory. He began writing and was successful with a short story “My clear and quiet rivers, far away.”

Short stories and essays, limited translations:In 1985, a superb short story is published, “Life as the string of a lute,” translated by Annie Curien (2). Two blind, a young man and his master, are storytellers and musicians. In the master’s lute, a talisman, which has been placed by his own master, should  allow him to recover his sight when he has broken at the end of his career, his thousandth string. 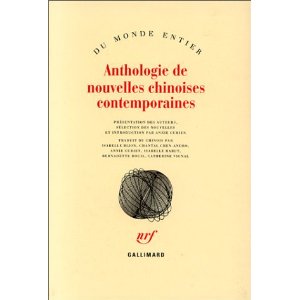 The talisman was a white paper but what is important is the goal that sustains life! “Remember, the lives of men are like this rope, and when it is stretched, we can play well, and when we have played well, this is essential.”

This text was adapted as a film by Chen Kaige in 1991, “Life on a String”. A film praised by critics but a commercial failure that gave rise to many political comments: why follow …blindly ..  leaders who deceive you with false promises?

In 2002, he received the Lao She award for a collection of essays “Written fragments in remission of my illness” a collection of six essays, written from 1998 to 2001, and comprising 240 fragments first published in a review. All these essays end with the same question “how to fix this? . He shows us the variety of his thoughts on humanity and religion.

As said by Han Shaogong “although he is hungry for values and faith, he is not bound to a specific cult. His thinking is characterized by an acute knowledge and a warm understanding of human life but never by fanatical superstition. “

A new success in 2006, a novel “My cohabitation with Ding Yi” which he wrote in three years because he could only work a few hours a day. A spirit that travels from very ancient times, stays in the body of many characters: Adam, the author and the hero Ding Yi; and these three characters representing different elements of the human spirit. Love between Ding Yi and Qin E is also an important topic of the book.

Shi Tiesheng is never bitter or sarcastic, but a constant thinking on his infirmity, his sickness. “What drives me to stay alive?”. That is also the heart of a great essay “The Ditan Park and I.”

A famous essay, “The Ditan Park and I”: This text was translated by Annie Curien in a collection of short stories (3) that can be found as second hand on the Internet. You can also look for this good English translation. 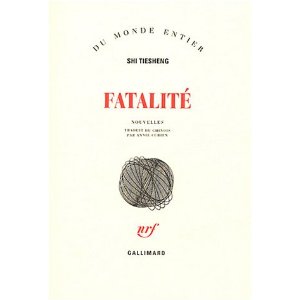 Ditan Park, located northeast of Beijing; it is known for platforms for the worship of the Earth that was performed in the past and should be known for the most beautiful peonies that can be found in Beijing.

The author lived nearby and has been touring the park in a wheelchair to hide his isolation and sometimes his depression. His mother did not accompany him; she knows he needs solitude, but she is worried and, without being seen, just makes sure  that everything goes well. Like other writers, he wrote for his mother but she will disappear before his talent is recognized.

His thoughts are disturbed or supported by other visitors: an elderly couple, a young man who loved to sing, a beautiful woman whose life he imagined, a long distance runner who fails to come forward, a disabled little girl. All this leads to a pacified meditation on his life.

The collection also includes “First Person”, a very clever short story, somehow fantastic. Going up the 21 floors to go to vist his new apartment, the hero, at each floor, looks at the details of the landscape; he is constantly discovering new characters which are sometimes disturbing or which may be the result of his imagination .

In “Fate”, it is the development of small facts that will explain how the hero, cycling, will slip, during the night, on an eggplant that is going to make him fall on the road at the exact time when drives a car that will leave him paraplegic.

As said by Shi Tiesheng in “The Ditan Park and I”, “I do not know if I look like a child or an elderly person or a lover in the middle of passion (but) … in the season when the morning glories are starting to open, the sound of the funeral horn is already heard. “

(3) “Fatality”, short stories. Including six short stories among which “The Ditan Park and I” and “First Person”. Gallimard 2004.