In Paris, Galerie Claude Bernard (1), he will exhibit small size inks on paper.

A year ago in London, on the occasion of his 70th birthday, I could ask him about his films and his paintings:

“Painting is not an illustration,an interpretation, there is an autonomy of the image. The vision is quite a different story ..There is another way of thinking with pictures ..The closest to this is music, the music brings such images without using language”.

His exhibition at the Museum Würth which I visited a few months after an article of Rue 89, was a real shock with stunning large formats.

As said by Pierre Haski: “The place is unlikely for a dialogue between two Nobel prizes. In the midst of the industrial zone of Erstein (Alsace), surrounded by bare corn fields, a German businessman, in 2008, has built a museum of contemporary art: it has presented a formal relationship between two men who both have received the Nobel Prize for literature, and who are drawing and painting: the Chinese (now a french citizen) Gao Xingjian and the German Günther Grass. “

“Bringing the works of these two giants at the heart of the Alsatian countryside, away from the spotlights in Paris is quite a  challenge. It is the one that handles during the past forty years Reinhold Würth, who brought a German family business to a leading position in the world in a rather unattractive area: bindings ! “

“But Reinhold Würth is also an art lover, and instead of installing his museums in Venice, he had them built where his plants are located, with a modest admission price! There are now Würth Museum in thirteen European countries. And it works . “ 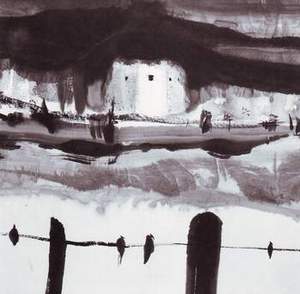 Thirty thousand people visited this exhibition, 500 people attended a debate between Gao Xingjian and his friend and translator Noël Dutrait. Instead of following this German entrepreneur, the french industrial leading companies, spend millions of dollars in “corporate” advertising campaigns without any cultural impact !

Again, a debate between Gao Xingjian and Noël Dutrait will be held in the library of the Centre Pompidou in Paris, Monday, January 17 at 19 hours. This will be followed by the screening of Gao Xingjian “After the Deluge” (2009), a wonderful film which has also been discussed:

– You speak of three components in your films ?

“Music, like image and words in a film must have their own life … if each element takes its autonomy over time, in this case we will obtain a new film aesthetics and get rid of the classical storytelling. “

“It is not the sound that underlines or explains the image; sound and music have their autonomy. “Silhouette” (2) brings to our minds the war and disasters, using a site of  collapsed buildings in Marseille. But this film also brings the theme of freedom with the seagull relaying my prose poem “The Wandering of the bird.”

– In “After the Deluge”, without words, the bodies of six actors, first in black and white,interact with your paintings … “There is a work quite subtle, at first, entirely black, then after the flood, there is some hope, life may come back, the images are lightly coloured … I use color very carefully, if it is not necessary, I do not use it. There may be extreme situations, in “Silhouette”, we see the old port of Marseille with highly violent colors. “