At the Guimet museum, the Han dynasty, the foundations of the Chinese civilization. 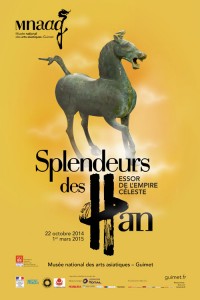 We did not mention many exhibitions in the Guimet museum in Paris concerning China, some of them were a bit disappointing, but it is without any reservation that we can recommend the exhibition ” Glory of the Han”, which celebrates the fiftieth anniversary of the establishment of diplomatic relations between China and France.

27 Chinese museums have lent more than 200 objects of importance and a remarkable work with the lay out and presentation was made specially by the exhibition curator, Eric Lefèvre. Layout and lighting of objects, but also optimal use of rather small areas which necessarily constrain ambitions but do not limit the efforts concerning information.

A few slides also show us the graves when opened with all that is needed for the journey into the afterlife. Archaeology is mainly of graves because the buildings and cities have disappeared although we can notice more systematic excavation on the foundations of cities including the capital Chang’an. This exhibition manages to show us a comprehensive overview of the political, economic, intellectual and military situation during the 400 years of Han China and especially its lifestyle.

1- The Han and Chang’an their capital
Michele Pirazzoli- t’Serstevens knows how to introduce Han China. Director of studies at the Ecole Pratique des Hautes Etudes, where I was fortunate to be her student, she has written a remarkable book on the topic ” The Han of China ” (Office du Livre, 1982):

“During the four centuries of its history, the Han dynasty (206 BC -220 AD) has implemented major political, economic, social and cultural structures of the Chinese world for two millennia. The Han empire was the Roman era of China … This autocratic monarchy, highly centralized and hierarchical, will be based on a syncretic Confucian ideology, a real unification center and a moral regulator of society.The educated elite, who overwhelmingly adhered to this ideology, will gradually position themselves into a powerful social class and monopolize the administrative functions as well as the economic levers of the state. The bureaucracy thus formed will survive the dynasty and be one of the factors of continuity and stability of Chinese society until the twentieth century” 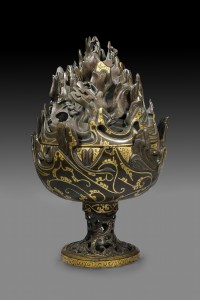 The Qin Emperor Shi Huang, died in 210 BC., world famous in recent years for his terracotta army; he has unified an empire of 60 million people, protected the borders with a Great Wall, developed roads, canals and agriculture and finally destroyed the old feudal system. The new dynasty, the Han, was born after a rebellion against the excesses of Qin, the harshness of the system, the excessiveness of the works and  the huge population transfers; but it has inherited the political organization of a unified China and a capital.

Of the capital, Chang’an, near the present city of Xian, virtually nothing remains. Yet the city was surrounded by a rammed earth wall 16m. thick at the base and 25 km. long; two-thirds of the area was occupied by the palace. It was one of the largest cities in the world at that time. Southwest of the city was a huge park and game reserve, the Shanglin Yuan, where were assembled all the species of the plant and animal world . Archaeologists can work for centuries on the imperial tombs and huge mounds because little has been excavated ..

2- The army and the “barbarians” 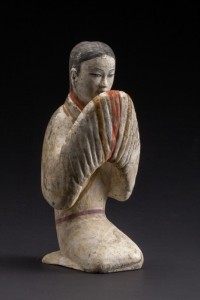 We are well informed about the army and the weapons used by the infantry of the Qin army but also by smaller figurines (ten of them being presented), those of the Yangjiawan tomb where were found 1800 soldiers and 500 riders.
Relations with the “barbarians” of Mongolia, the Xiongnou, are presented without sufficient details.The Xiongnous invaded the northern part of the empire and Chinese armies, who lost a battle in 201 near the present city of Datong, will have to sign a treaty and pay tribute. This is no solution as the Xiongnous, forty years later, will come as close as 150 km from the capital. This will be the great achievement of the reign of Wudi (140-87 BC.) to drive back  these “barbarians”, including penetrating Central Asia to ensure allies on their western flank (Zhang Qian mission).

It was also necessary to procure horses, beautiful horses as their bronze representation of the Leitai site. The exhibition does not give much information on the conquest of the Dian kingdom and we are a little frustrated not to find more of the splendid bronzes of the Kunming (Yunnan) museum.

3- The art of living 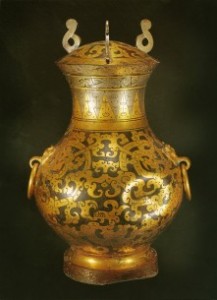 The princes, who have lost their political power, retain the proceeds of certain taxes and lead a flashy lifestyle. Exceptional pieces from the Mancheng (south of Beijing) tomb: two bronze vases, gold and silver, which were used to store fermented beverages and a beautiful incense burner inlaid with gold, a miniature reproduction of the sacred mountains.

Several pieces come from the graves of Mawangdui near Changsha (Hunan); the graves of a family: Li Cong, Marquis of Dai and his wife and one of their sons. The tomb of the Marquise, located at the bottom of a large pit with several nested coffins (one in lacquered wood), protected by a layer of charcoal and a meter thick of clay. This isolation explains the exceptional state of preservation of the body of the Marquise, textiles and splendid lacqerware and all the necessities of life, which have been found. The famous painted silk banner, focused towards the passage to the hereafter, is not presented.

4. Economic life and writing
The development of agriculture and technical progress (iron tools, plowshares, irrigation works) have a significant impact on Chinese society. State control develops with the state monopoly on salt and iron in 119 BC. then on alcoholic beverages. Government Manufactures are also created for the manufacture of lacquers.

The exhibition shows the coins and their moulds; a monopoly and a standardization during the Qin era was succeeded by the possibility for each fief to mint, which was finally banned in 112 BC.

Written work is central to this civilization; brushes, ink, ink stones, stamping stone stelae, all this is very well presented. The tombs provide large amounts of wood and bamboo tablets, fixed by links between them. Silk is also used for writing and archive. But it’s paper, one of the major inventions of China, which will play an important role.

5- The arts and the beyond
Funeral figures of dancers are particularly beautiful with their long sleeve dresses. Many musical instruments are presented: bells, musical stones and especially bronze bells chimes (19 bells), devoid of clappers, hanging from a wooden beam and arranged in ascending order of tone.

Due to lack of space, we cannot give some insight in the texts concerning dualistic conceptions of the soul, the rituals, the evocation of heaven and the immortals but we should mention a key piece of the exhibition: the jade costume, sewn with gold threads, discovered twenty years ago near Xuzhou (Jiangsu). Jade was considered able to promote the immortality of the soul and the integrity of the body; this jade suit made for the third Prince of Chu, consists of 4248 chips of jade and gold threads (almost three pounds).

Finally, it should be mentioned that this beautiful exhibition is accompanied by scientific meetings on December 4th, several conferences and a good catalog. The auditorium of the museum, led by Hubert Laot, has prepared a series of documentaries and fiction films, a very interesting program.

” The glory of the Han, developments of the heavenly empire”, exhibition at the Guimet museum in Paris, until 1 March 2015.
http://www.guimet.fr/fr/expositions/expositions-a-venir/splendeur-des-han-lessor-de-lempire-celeste